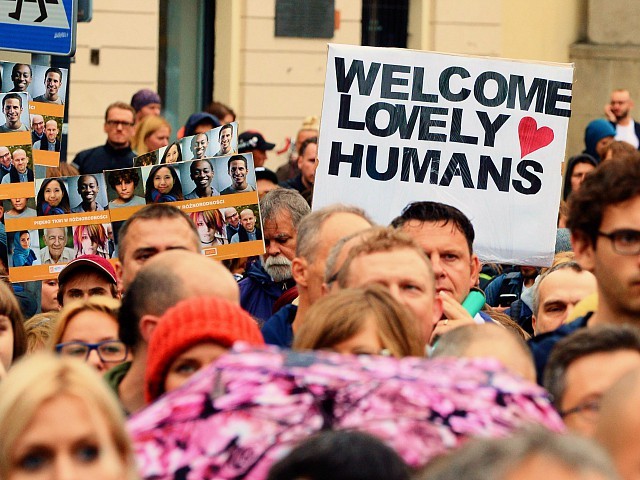 Allegations of sexual misconduct between potentially underage girls and foreign men at the pro-multicultural ‘EuroWeek” project have sparked concerns and a possible investigation by Polish authorities.

Earlier this week Dariusz Matecki, a member of the ruling Law and Justice (PiS) party, released a recording of a girl claiming that a young girl who had participated in EuroWeek had been sent lewd messages by one of the migrant men participants, saying he had sent pictures of his genitals to her, Polish broadcaster TVP reports.

Matecki said he was currently investigating “whether these were children under the age of fifteen and whether any law enforcement agencies were notified at all in this matter.”

There are also reported pictures on Instagram and social media of the migrant men hugging and kissing the cheeks of the girls, with Matecki remarking, “Even if there is not an answer to anything, is it normal that a 30+ year old “volunteer”-“teacher” kisses a strange child who came to the camp without parents? They are running Multiculti indoctrination camps in Poland!”

The EuroWeek project describes itself as having a “unique cross-cultural approach” and provides workshops on several subjects including a “Refugee Workshop,” and a “Climate Change Workshop.”

President of the board of the EuroWeek Association School of Leaders Adam Jaśnikowski slammed the allegations saying, ” I declare with full responsibility that none of the participants, teachers, or parents has ever reported a single case of abuse or irregularity on the part of those conducting classes referring to inappropriate behaviours under the EuroWeek programme.”

Despite this, the allegations have gained traction on Polish social media and have come to the attention of authorities, as well. Polish Interior Minister Joachim Brudziński replied to a tweet about the case saying, “I have already taken care of it.”

It was later revealed that the interior minister had spoken with Polish Education Minister Anna Zalewska, and had directed Chief Police Commander Jarosław Szymczyk to investigate the matter.

Polish police later confirmed this, writing, “We have taken swift action in securing evidence to be sent to the appropriate public prosecutor’s office.”

The allegations come after left-wing NGOs, particularly those which work with asylum seekers, have been accused of sexual misconduct, including the Mercy Corps which has been funded and allied with left-wing Hungarian-American billionaire George Soros.