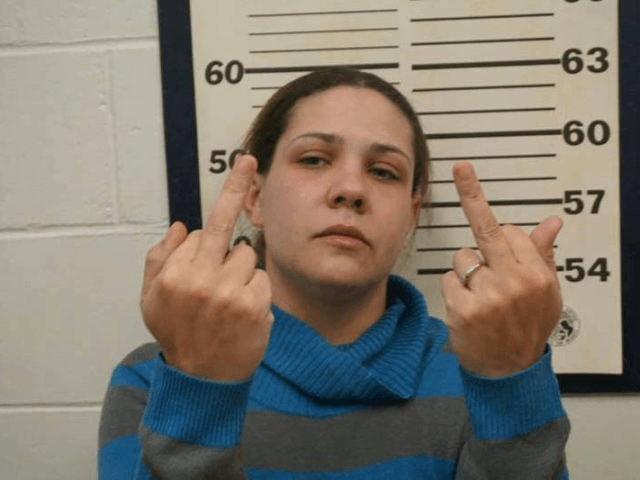 Old Bridge resident Shana A. Hilsman made her opinion of authorities clear in an arrest mugshot that lit up local social media.

Hilsman was arrested on February 1 on charges of burglary. She was caught red-handed in someone’s driveway, carrying a screwdriver, hammer and flashlight. Both the flashlight and her clothing matched those seen in a surveillance video of a previous car break-in attempt.

When she was brought into the station, she added a bit of her own flair to the proceedings. She stared down the camera, both middle fingers upraised. As is their practice, the Spotswood police posted the arrest photo on their Facebook page. After a flurry of user comments, they responded:

“We don’t run a photography studio. If that’s the way you want to pose for our report mugshot then that’s what it will be,” they wrote. “We have other things to do like catch more people doing bad things, not take pictures you are satisfied with,” the post continued. “There is zero excuse for that type of behavior so stop defending it. It will go on deaf ears.”

Hilsman is currently being held at the Middlesex County Adult Corrections Center until her hearing.