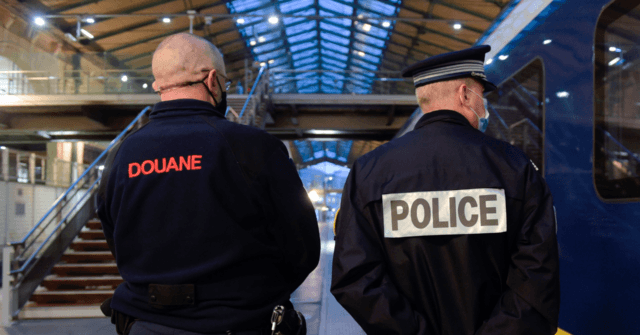 A knifeman wielding a blade engraved with the anti-police slogan ‘ACAB’ (All Cops are Bastards) was shot dead by railway officers at a major train station in Paris in the early hours of Monday morning.

French Interior Minister Gérald Darmanin revealed in a statement that a man was shot by police officers of the Railway Networks Brigade (BRF) at the Gare du Nord station at around 7 am Monday morning after threatening officers with a knife.

The would-be attacker approached officers near the tracks with a knife, and after being told several times by police to drop his weapon, three or four shots were fired by the cops, killing the man, the local Le Parisien newspaper reported.

The publication went on to claim that the man was weilding a 30-centimeter (12 inch) blade that was engraved with the anti-police slogan ‘ACAB’ or ‘All Cops/Coppers are Bastards’, a British phrase that was popularised by far-left activists such as Antifa and Black Lives Matter in the wake of the killing of George Floyd in America in 2020.

Le Parisien went on to report that a Twitter account bearing the same name as the ID card found on the deceased knifeman displayed other inflamatory anti-police rhetoric.

“Whether you like it or not, I have the legal right to kill French police officers,” a post on the social media account from January said.

The Alliance Police Union claimed that the attack was “a premeditated” and “anti-cop terrorist act” with the “sole purpose of killing a cop” adding that the “threat is very real” for police on the streets”.

In a statement on social media, Police Prefect Didier Lallement “saluted the courage of the police officers who, at Gare du Nord, were able to react…to a cowardly attack.”

The Minister of Transport Jean-Baptiste Djebbari said that the man was “known to the police for wandering in the station” and that the case is not currently being treated as terror-related.

A newspaper seller who was nearby during the incident on Monday said of the attack: “We were in the store, and we immediately understood what was happening when we heard the [bangs] and saw people running panicked.

“[I’ve been in] two wars, so it doesn’t bother me. But I know that for other station traders, it must be very different. The climate here is good, we know that there is necessarily a risk because we work in a station. But today, risk can be everywhere. You know, I live in front of the Bataclan.”

A second station shopkeeper said: “We know it can happen when we work in a station, but we avoid thinking about it every morning. I heard the three shots. The instructions are very clear: we immediately lowered the shutters. It is both the protocol and a reflex. My hands are still trembling.”