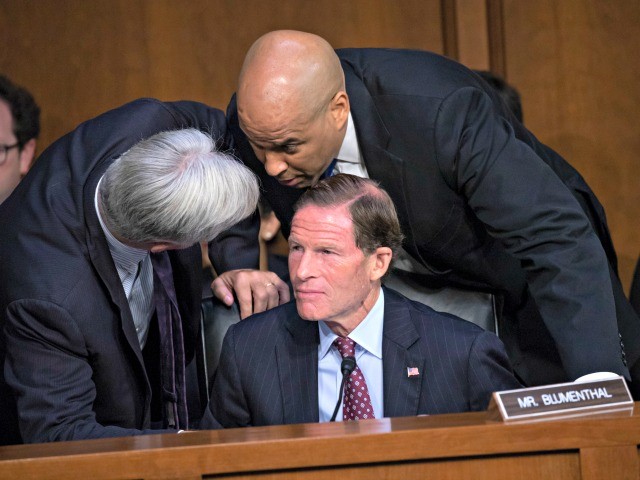 All ten Democrats on the Senate Judiciary Committee signed a letter Wednesday demanding that President Donald Trump withdraw the nomination of Judge Brett Kavanaugh to the U.S. Supreme Court.

Citing “multiple allegations of sexual assault” — those of Christine Blasey Ford (Kavanaugh groping at high school party), Deborah Ramirez (Kavanaugh exposing himself at college party), and Julie Swetnick (Kavanaugh present at gang rapes in high school) — all of which Kavanaugh denies, and none of which has been corroborated — Democrats asked Trump to “immediately direct an FBI investigation or withdraw this nomination.”

All 10 Democratic members of Senate Judiciary Cmte. call for President Trump to “immediately withdraw” Kavanaugh nomination, or direct the FBI to re-open its background investigation and “thoroughly examine the multiple allegations of sexual assault.” pic.twitter.com/pU6C98xPiN

In the letter, Democrats also refer to Ford’s accusations as “credible,” though they have been contradicted by the four witnesses she has named as being there. They refer to the other accusations as “consistent,” though Ramirez’s claims were also denied by all of the eyewitnesses.

It was not clear from the letter whether Democrats would still participate in Thursday’s scheduled hearing, where Ford and Kavanaugh are expected to testify under oath, and the judge — who has served for twelve years on the U.S. Court of Appeals for the District of Columbia Circuit — is expected to deny Ford’s accusations and others that have emerged.

The signatories to Wednesday’s letter include Sen. Richard Blumenthal (D-CT), who falsely claimed to have served in Vietnam, and by Sen. Cory Booker (D-NJ), who admitted during college that he had groped a girl in high school without her consent.

All of the claims emerged after confirmation hearings, and after ranking member Sen. Dianne Feinstein had concealed Ford’s uncorroborated claim since July.