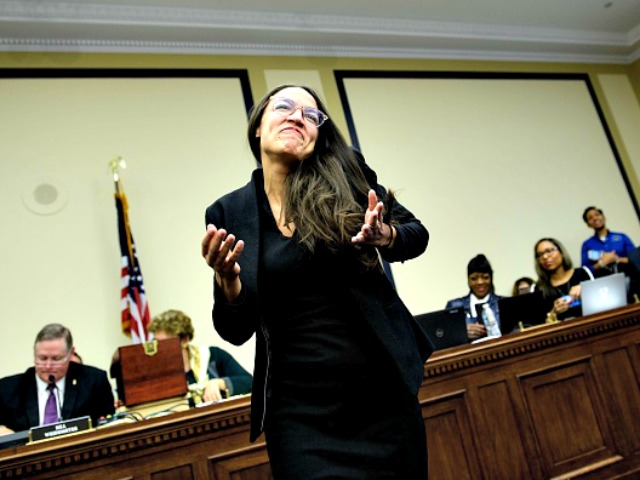 Alexandria Ocasio-Cortez (D-NY), a Democratic Socialist who won election to Congress in the 2018 midterm election, said on Thursday that she would like a seat on the House Financial Services Committee — a powerful committee that oversees the country’s financial sector.

“I think with our district, we can be ambitious, so we’re kind of swinging for the fences on committees,” Ocasio-Cortez told HillTV. “We might as well ask for something big.”

The Financial Services panel is one of the most sought-after House committees. Its members wield significant influence over Washington’s relationship with Wall Street, and the panel offers access to millions of dollars in financial sector campaign donations.

The committee is also is expected to lead several investigations into President Trump’s personal finances, along with potential connections between his businesses and Russian oligarchs.

The Hill noted in its report that the committee is a popular assignment with New York-based lawmakers, but freshmen members are rarely rewarded with a seat.

Ocasio-Cortez also told the Hill that she would also like to join the Energy and Commerce Committee,

In perhaps a move to make one or both of those assignments happen, Ocasio-Cortez recently fell in line with other Democrats who say they will vote for House Minority Leader Nancy Pelosi (D-CA) for Speaker when the party takes the majority in that chamber in January.

“Joining the Financial Services panel would give Ocasio-Cortez greater power to pursue key aspects of her platform, such as expanding access to affordable housing,” the Hill reported.

Rep. Maxin Waters (D-CA), an anti-Trump zealot who has repeatedly called for President Donald Trump to be impeached, will likely lead the Financial Services Committee.

Ocasio-Cortez became a political phenomenon when she defeated 10-term New York Democrat Congressman Joe Crowley in the 2018 primary in that state. At 29, she will be the youngest woman to serve in Congress.