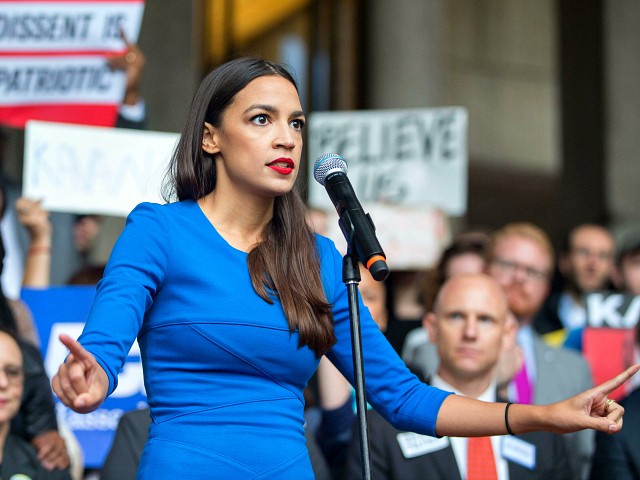 Rep. Alexandria Ocasio-Cortez (D-NY) — who has claimed the world will end in a dozen years if climate change is not stopped — joined Rep. Chellie Pingree (D-ME) in chastising the nation’s largest technology companies for sponsoring a libertarian students’ conference in Washington, DC, because it included a panel discussion on the need for debate on climate change.

The lawmakers targeted Google, Facebook, and Microsoft for being sponsors for LibertyCon in a letter to the tech giants on Monday accusing them of the “spreading of misinformation.”

Reps. Alexandria Ocasio-Cortez and Chellie Pingree wrote to CEOs of Google, Microsoft and Facebook for information about the companies’ sponsorship of a conference that they say included “a session denying established science on climate change” pic.twitter.com/QclNYGeris

We cannot allow the financing of misinformation campaigns to shape our democracy.

We can disagree on policy, but climate change is real. Period.

Proud to have joined @chelliepingree on this letter asking for greater responsibility to our democracy and planet. https://t.co/5hLsg1FmgT

Ocasio-Cortez and Pingree’s letter included the fact that sponsorship does not necessarily mean an endorsement of everything taking place at a conference:

However, given the magnitude and urgency of the climate crisis that we are now facing, we find it imperative to ensure that the climate-related views espoused at LibertyCon do not reflect the values of your companies going forward.

As you are well aware, the spreading of misinformation can be dangerous to our society. Today’s coordinated campaign to deny climate change, or to put a positive spin on its effects, is not unlike that of the tobacco companies which once sought to discredit their product’s link to cancer. Their propaganda kept the nation from addressing a public health crisis for years, leading to many preventable deaths. We cannot afford to make the same mistake again with climate change.

The letter concluded by asking the tech giants to be “allies in the fight for a more sustainable future.”

Mother Jones reported on the conference, saying that the group CO2 Coalition held a discussion called, “Let’s Talk About Not Talking: Should There Be ‘No Debate’ that Industrial Carbon Dioxide is Causing Climate Catastrophe?”