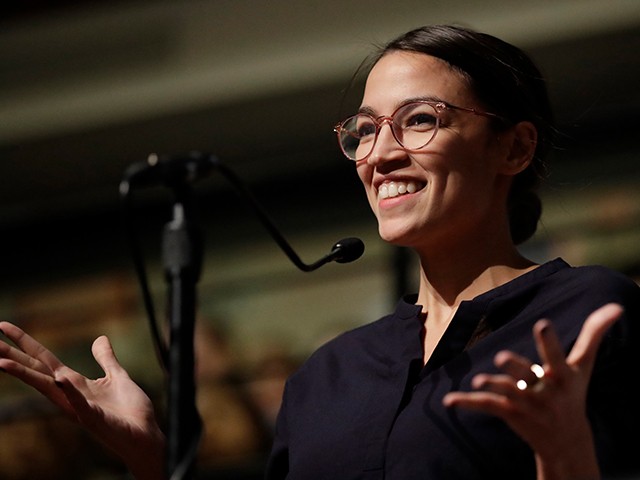 Rep. Alexandria Ocasio-Cortez (D-NY) struggled to explain how she would pay for her $40 trillion new federal government programs during a Sunday interview with Anderson Cooper on CBS’s 60 Minutes.

Anderson Cooper asks socialist Alexandria Ocasio-Cortez how she plans to pay for the $40 trillion in big government programs she supports.

She could not answer the question. pic.twitter.com/dCpbO5ECmp

“No one asks how we’re gonna pay for this Space Force. No one asked how we paid for a $2 trillion tax cut,” Ocasio-Cortez said.

“We only ask how we pay for it on issues of housing, health care, and education,” Ocasio-Cortez said. “How do we pay for it? With the same exact mechanisms that we pay for military increases for this Space Force, for all of these ambitious policies.”

“We pay more per capita in health care and education for lower outcomes than many other nations,” she added. “And so for me, what’s unrealistic is — is what we’re living in right now.”

Despite not giving any specifics on how she would pay for the expansive government programs she had proposed, Ocasio-Cortez suggested at another point during the interview that the government should raise the tax rate to as high as 70 percent to fund climate change programs.

The 60 Minutes interview is not the first time Ocasio-Cortez has struggled to explain how she would fund $40 trillion in entitlement programs she is proposing.

In September 2018, Ocasio-Cortez deflected CNN host Jake Tapper’s question about how she would pay for $40 trillion in government programs like “Medicare for All.”

The freshman Democrat also reportedly dodged a reporter’s question recently about whether she would take a salary during the government shutdown, simply telling the reporter, “I’ve gotta run!”