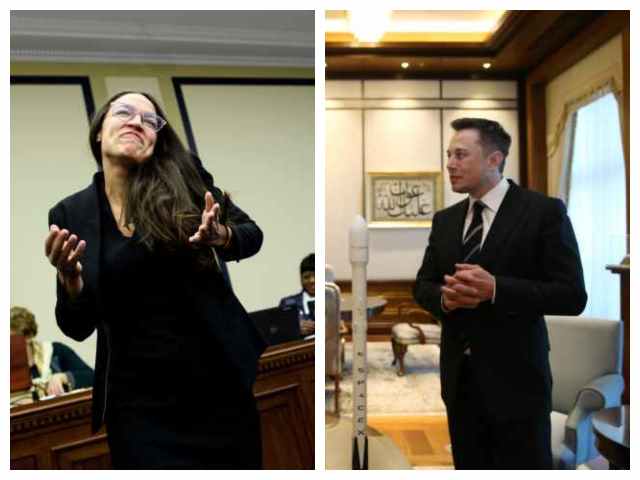 During a climate change town hall event, Rep.-elect Alexandria Ocasio-Cortez (D-NY) criticized Elon Musk’s  Tesla for receiving government funding, saying that the government got “no return on our investment” in the company.

Speaking at a climate change town hall organized by Senator Bernie Sanders of Vermont recently, Democratic Rep.-elect Alexandria Ocasio-Cortez criticized Elon Musk’s electric car manufacturer Tesla over the company’s use of taxpayer funds. “When we as a public choose to invest in new technologies, we deserve a return on that investment,” Ocasio-Cortez said when discussing government investments in green energy.

This isn’t the first time that Ocasio-Cortez has spoken out against the government funding of private businesses, the Democratic Rep.-elect has previously criticized e-commerce giant Amazon stating in a tweet: “We’ve been getting calls and outreach from Queens residents all day about this. The community’s response? Outrage.” She continued, “Amazon is a billion-dollar company. The idea that it will receive hundreds of millions of dollars in tax breaks at a time when our subway is crumbling and our communities need MORE investment, not less, is extremely concerning to residents here.”

While it seems that Ocasio-Cortez may have a good point in relation to the government funding of private tech firms, the young Socialist has made a number of questionable comments in recent months. She previously called for the abolishment of the electoral college, referring to it as a “shadow of slavery’s power” in America.

It is well past time we eliminate the Electoral College, a shadow of slavery’s power on America today that undermines our nation as a democratic republic. https://t.co/00HZN3MI6F

And recently failed to name the three branches of the U.S. government. “If we work our butts off to make sure that we take back all three chambers of Congress — uh, rather, all three chambers of government: the presidency, the Senate, and the House,” Ocasio-Cortez said on a video call with Justice Democrats. The U.S. government is, however, divided into three branches: the executive branch, the judicial branch, and the legislative branch.