Rep. Alexandria Ocasio-Cortez (D-NY), when asked what an America with “defunded police” looks like, stated that it “looks like a suburb.”

The New York lawmaker answered a few questions on Thursday, posting them to her Instagram story. One of the questions was, “What does an America with defunded police look like to you?”

“The good news is that it actually doesn’t take a ton of imagination,” Ocasio-Cortez began in her typed response, seemingly blaming the struggles of urban areas, almost entirely, on overemphasizing police departments.

“It looks like a suburb. Affluent white communities already live in a world where they choose to fund youth, health, housing, etc more than they fund police,” she wrote.

“These communities have lower crime rates not because they have more police, but bc they have more resources to support healthy society in a way that reduces crime,” the lawmaker continued, contending that white communities “bend over backwards to find alternatives to incarceration for their loved ones to ‘protect their future,’ like community service or rehab or restorative measures.”

Ocasio-Cortez also claimed that “affluent white suburbs” also “design their own lives so that they walk through the world without having much interruption or interaction with police at all aside from community events and speeding tickets”: 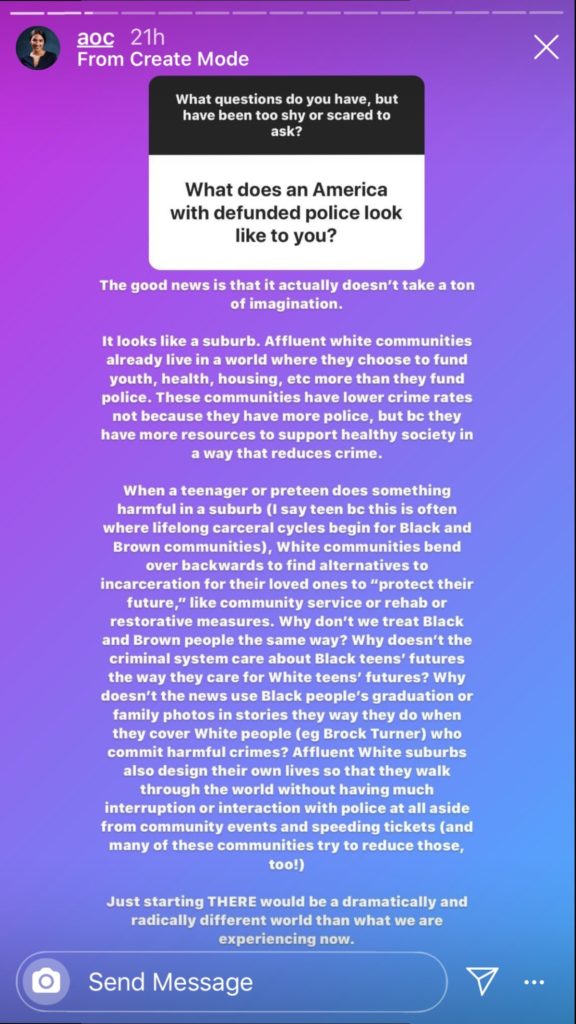 Ocasio-Cortez also argued that officers will not be greatly affected by slashes to police budgets, as part of the reduction can simply come through refusing to replace retiring officers with new ones.

“Another place to trim is stocking up on militarization, weaponry, and the use and development of harmful technology like facial regonition in our subway systems and public spaces,” she added: 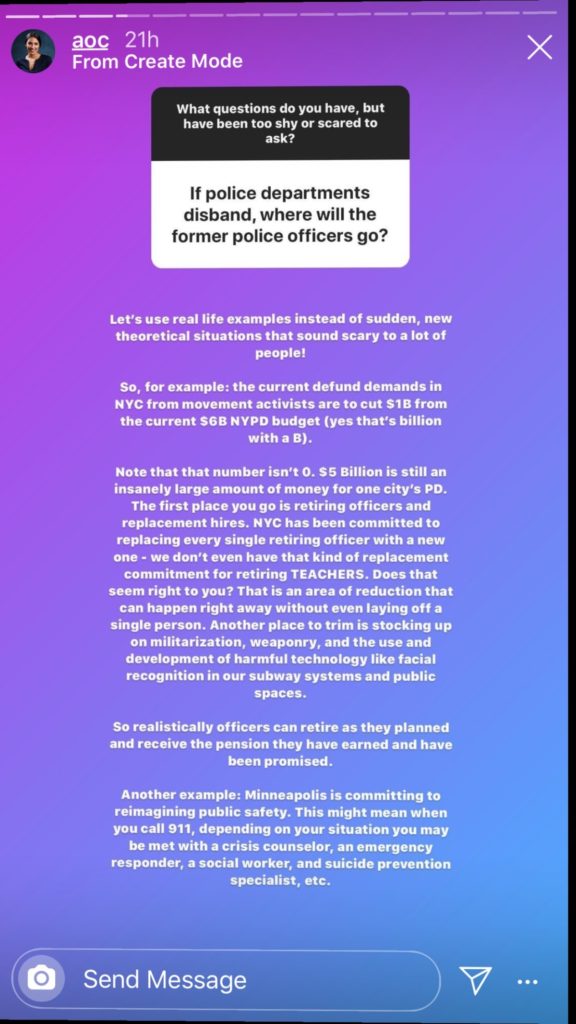 Ocasio-Cortez’s assertion — that a defunded police department “looks like a suburb” — is not the case in Seattle’s own police-free “Capitol Hill Autonomous Zone” (CHAZ).

The city essentially allowed political opportunists — including members of Antifa, socialists, and self-described anarchists — to establish their own “autonomous,” police-free, zone.

“We have no police. … They’re shit!” one protester yelled as officers attempted to return to the abandoned East Precinct on Thursday.

On Thursday, Seattle Police Chief Carmen Best said calls for service have “more than tripled,” as has their response time due to the abandonment of the precinct in the “autonomous” zone.

“These are responses to emergency calls — rapes, robberies, and all sorts of violent acts that have been occurring in the area that we’re not able to get to,” she said:

Seattle Police Chief: “Rapes, robberies and all sorts of violent acts have been occurring in the area and we’re not able to get to [them].” #capitolhillautonomouszone #antifa #BlackLivesMatter pic.twitter.com/Oe5YfVz3uL

“If that is your mother, your sister, your cousin, your neighbor’s kid that is being raped, robbed assaulted (or) otherwise victimized, you’re not going to want to have to report that it took the police three times longer to get there to provide services to them,” she continued.

While those occupying CHAZ claim to stand in solidarity with the Black Lives Matter movement, some say it has been highjacked by political opportunists, such as members of the violent group Antifa, who seek to sow further discord.

Meanwhile, Seattle protesters have released a list of demands, including free health care, free public housing, free college, amnesty for illegal immigrants, and the complete abolition of the Seattle Police Department — demands that do not tend to serve as hallmarks of the supposed “affluent” suburbs Ocasio-Cortez envisions.