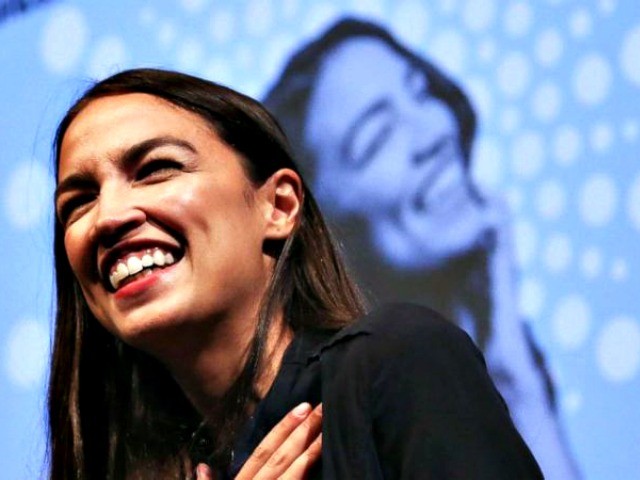 Alexandria Ocasio-Cortez backed an effort Saturday by a group called the Justice Democrats, which opposes “Democratic incumbents who are demographically and ideologically out-of-touch with their districts.”

In a tweet, she supported the Justice Democrats’ new “#OurTime” campaign:

If you’re a strong progressive leader in your community and committed to getting money out of politics, I want you to join me in Congress. I want you to run.

To run in 2020 without corporate money, you need to start considering now. Join @justicedems tonight to learn more ⬇️ https://t.co/7hkAFkaZ4A

Since winning her election Nov. 6, Ocasio-Cortez has continued to challenge the Democratic Party leadership, joining a sit-in protest in the office of House Minority Leader Nancy Pelosi (D-CA) over climate change policy.

Though she has not yet taken office, Ocasio-Cortez is already committing to replacing many of her colleagues — apparently on the basis of race and ideology.

A press release from the Justice Democrats declared (original emphasis):

After participating in sit-ins at Nancy Pelosi’s office on Tuesday, Justice Democrats officially launched the #OurTime project to repeat the organization’s success in recruiting and electing Congresswoman-elect Alexandria Ocasio-Cortez. The progressive grassroots organization will recruit the next generation of primary challengers to Democratic incumbents who are demographically and ideologically out-of-touch with their districts. The online conference call where the project was announced was joined by Ocasio-Cortez, who voiced her support for the project.

“We recruited and supported Ocasio-Cortez all the way to a historic victory and now we’re going to repeat the playbook,” said Justice Democrats Executive Director Alexandra Rojas. “There’s lots of blue districts in this country where communities want to support a new generation of diverse working-class leaders who fight tirelessly for their voters and build a movement around big solutions to our country’s biggest problems. We’re creating an alternative pathway to Congress for grassroots candidates to become leaders in the Democratic Party.”

The #OurTime project is a grassroots candidate recruitment effort asking Democrats and progressives around the country to submit nominees for both potential candidates and districts where an Alexandria Ocasio-Cortez-style campaign might succeed. The organization will prioritize candidates who are women, represent the diversity of communities in their district, and support the major tenets of Justice Democrats platform: rejecting corporate PAC donations, Medicare For All, free college, dismantling mass incarceration and deportations, and a Green New Deal.

Others backing the campaign include Palestinian American Representative-elect Rashida Tlaib (D-MI), whose views are so hostile to Israel that even the left-wing J Street organization withdrew its support for her campaign.