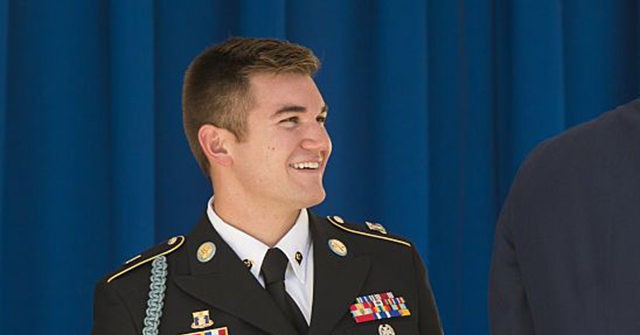 Alek Skarlatos, the Army National Guard veteran who heroically stopped a terrorist from hijacking a train, is now running to flip a key district in Oregon that could help deliver the House to Republicans.

Skarlatos is running for a seat in the U.S. House of Representatives to represent Oregon’s 4th district — a district that Hillary Clinton won by only a tenth of a percent over President Trump.

He is running to dislodge far-left incumbent Rep. Peter DeFazio (D-OR), who has held that seat for 33 years and is a backer of defunding the police and Rep. Alexandria Ocasio-Cortez’s (D-NY) Green New Deal.

Skarlatos said he decided to run after meeting a state senator and looking into why his district was the poorest in the state.

“The more I learned, the angrier I got,” he said on Sirius XM’s Breitbart News Saturday, where he spoke with host Matthew Boyle, Breitbart News political editor, to discuss his run.

“You had a huge economic downturn [in southwest Oregon] since timber went away in the late 80s, early 90s, and it’s really all just been politically motivated. There’s been no real tangible reason for southwestern Oregon being the poorest Congressional district in the state,” he said.

“I felt like after 33 years in office, Peter DeFazio, if he was going to do anything for us, he would have done it by now. And I felt like he doesn’t represent the district anymore, and he’s incredibly far-left,” he added.

He said of DeFazio:

He co-founded the House Progressive Caucus with Bernie Sanders (I-VT), and he co-sponsored the Green New Deal with AOC. He votes with AOC 96 percent of the time, but this is…a very moderate or a toss-up district. It’s not a district where you would traditionally have an outright socialist. So I felt like he didn’t represent the district, and I could do a better job, and that’s really why I’m running.

It’s just because I think the people of southwestern Oregon have gotten a raw deal for far too long, and I think it’s time we turn that around.

In contrast to DeFazio, Skarlatos does not believe in cutting funding from the police.

“I don’t think that cutting funding or diverting funding away from police is going to solve this,” Skarlatos said

“If you defund the police or cut their training, you’re just going to have more bad cops. It’s not going to make the situation better,” he said.

Skarlatos also discussed how he used his training in the Army National Guard and knowledge of weapons to spring into action to stop a terrorist attack aboard a train in France with his two childhood friends.

He had just come off of a deployment to Afghanistan in 2015 when he joined his friends for a vacation in Europe.

Several hours into a train ride to Paris, Skarlatos heard a gunshot and breaking glass. He turned around and saw a train employee running, followed by a shirtless man holding an AK-47. He tapped one of his friends, Spencer Stone, who was sleeping but had awakened, and said, “Let’s go.”

Stone, an Air Force veteran, ran after and tackled the armed man, who pulled out box cutters and began violently fighting back. Skarlatos and Stone, with their bare hands, subdued him, while a third friend, Anthony Sadler, helped.

Skarlatos, after the attack, was invited to join ABC’s Dancing with the Stars.

Listen to the full interview here: