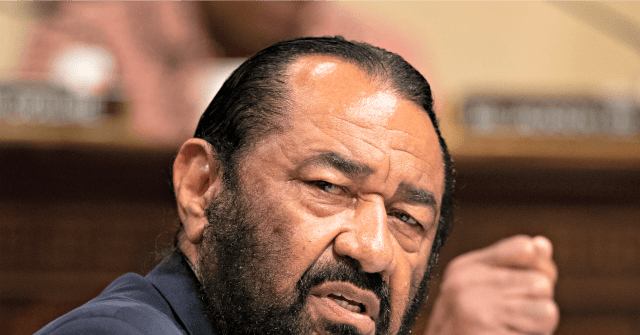 Rep. Al Green (D-TX) at a hearing on Wednesday perpetuated the hoax that President Trump called white nationalists at a rally in Charlottesville, Virginia in 2017 “very fine people.”

Sir, in my job, I have to believe there were nice people there because it is my job to try to pull them out. However, I think the statement of ‘very fine people’ was a very dangerous one, because it did equivocate two things that were not equal.

Green and Picciolini were referring to Trump’s frequently misconstrued remarks.

Trump delivered a speech after a rally in Charlottesville that began as a protest against removing a Confederate statue was marred by white supremacist violence.

In his speech, he referred to some of the non-violent protestors as “very fine people” but specifically condemned white supremacists and called them “criminals and thugs.” Trump said:

I’m not talking about the neo-Nazis and white nationalists because they should be condemned totally.

Racism is evil, and those who cause violence in its name are criminals and thugs, including the KKK, neo-Nazis, white supremacists, and other hate groups that are repugnant to everything we hold dear as Americans.

However, Democrats, including some of the 2020 candidates, have continued to push a narrative that Trump called white supremacists “very fine people,” when he clearly did not.