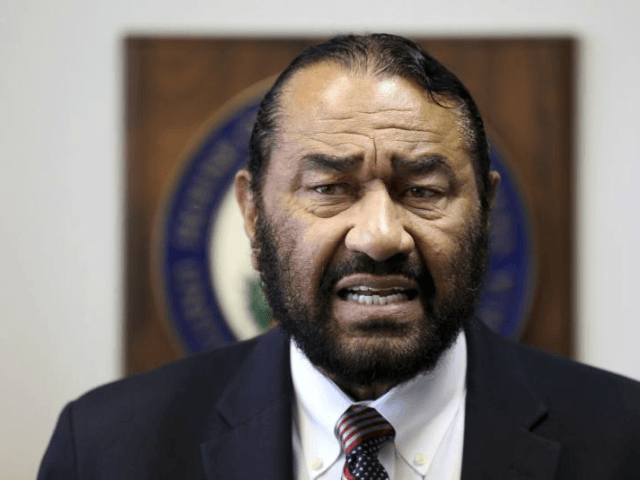 Rep. Al Green (D-TX) on Tuesday suggested that he will soon bring articles of impeachment against President Donald Trump for “bigotry.”

While prominent Democrats have tiptoed around the question of whether Trump should be impeached before Special Counsel Robert Mueller finishes his investigation, Green said there are plenty of other reasons to impeach Trump, including Trump’s “bigotry.”

Green said “that’s not what the people who suffer from the bigotry have to endure… they have to deal with the actual bigotry, the actual ugliness being fostered across the length and breadth of this country as a result of the bigotry.”

“They’re people who are suffering. The culture is changing. Bigotry is real. And people have to deal with it. Because they do,
I don’t think we should allow bigotry to go unnoticed as it emanates from the presidency,” Green continued. “Because I don’t think so, I will make an announcement sometime next week, more than likely, as to whether or not … we will have additional articles of impeachment brought before the House.”

Green emphasized that he has “never interfered with the Mueller investigation” and does not “intend to interfere with it.”

“I just believe that we ought not to allow bigotry to go unnoticed… We ought not to try to get to a point in this country where we will allow bigotry to be nothing more than a talking point,” he said. “It ought be an action item…The greatest place to ascertain whether or not it is an action item is how we as members of Congress not only talk about it, but how do we vote when the issue is given an opportunity to be voted upon.”

Green introduced articles of impeachment against Trump last year and earlier this year insisted to Democracy Now that Trump “does not have to commit a crime to be impeached,” as Breitbart News reported.

“In fact, the president is not likely to be indicted, which means he’s not likely to be found guilty of a crime while he’s sitting, which means that if this comes before the House, it won’t come before the House as a president who has been found guilty, but rather as a president who is alleged to have committed certain offenses that are onerous to the Constitution and that harm society,” Green said. “And what this president is doing is harming society.”

Green also suggested that Trump could be impeached because of “incompetent behavior that is harmful to society” and cited Trump’s border policy and his reported “S-hole countries” remarks about “some countries in Africa, in the Caribbean, in South America.”

“You produce a work product that is harmful to African countries. That’s a link between his bigoted commentary and policy that has been produced. Policy rooted in bigotry,” Green said earlier this year at the Congressional Black Caucus Foundation’s Annual Legislative Conference. “Then children on the border of color…. You produce a policy that separates them from their parents. When I add all of this together, a person who is placing his bigotry into policy that is harmful to our society. And for that he ought to be impeached.”