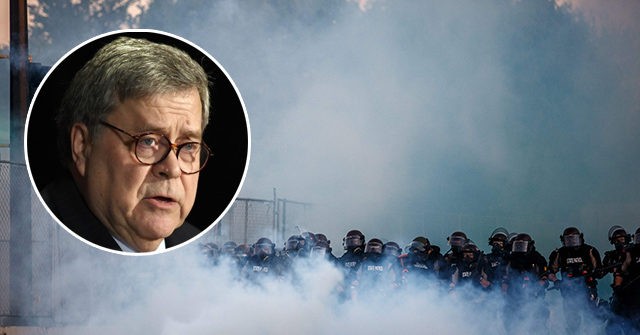 Attorney General William Barr has sent federal riot teams to Washington, D.C., and Miami as part of an effort to blunt ongoing violent unrest in both cities over the death of George Floyd.

Barr has directed members of the federal Bureau of Prisons to deploy, while the FBI has asked its Hostage Rescue Unit to assist in D.C., said a Justice Department official, according to USA Today.

The move by Barr comes after a previous warning that violence “instigated and carried out by Antifa and other similar groups in connection with the rioting is domestic terrorism and will be treated accordingly.”

Sunday night, the Secret Service moved President Trump to a secure bunker beneath the White House for the second time in three nights. He was also taken to the bunker, which was built to house the president in the event of a nuclear attack, on Friday night.

President Trump was moved to the bunker as a precaution due to growing demonstrations late Sunday near the White House and the National Mall. The activism began peaceful but turned violent after dark, with some demonstrators setting multiple fires. Washington, D.C., police fired pepper bullets and tear gas to disperse protesters.

Sunday was the sixth straight night of mass demonstrations nationwide following Floyd’s death, which occurred May 25. Video footage of Floyd’s arrest, which included a Minneapolis officer kneeling on his neck, has spurred widespread outrage across the United States.

Thousands of demonstrators were arrested over the weekend after clashing with police and defying curfews in numerous major U.S. cities, including Los Angeles, New York City, Miami, Chicago, Seattle, and Salt Lake City.