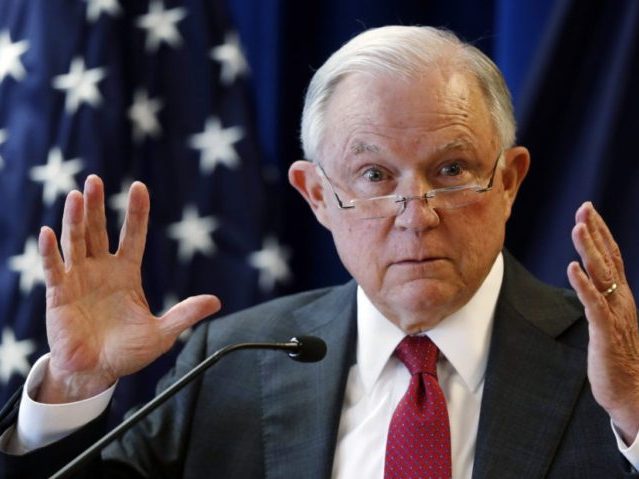 In June, one-in-six asylum applicants were rejected at the border, up from one-in-10 during April and May, according to the April-to-June report recently issued by the Department of Homeland Security. The test, dubbed the “Credible Fear” test, is vital because migrants who fail the test can be quickly deported without being released.

That 50 percent jump in the May-to-June rejection-rate came as Sessions issued new asylum rules on June 11, but before the DHS released detailed instructions to border officers on July 11.

The June rules and July instructions likely raised the subsequent rejection rate in July, August, and September because they are far more restrictive than the pro-migration rules established by President Barack Obama.

Officials are expected to release the July-to-September rejection numbers in November.

The rejection rate is vital because President Donald Trump needs the DHS and the Justice Department agency to step up asylum rejections as the Honduran caravan and the cartel-aligned labor-traffickers deliver more economic migrants to the U.S. border.

Sessions’ reforms allow officials to quickly deport more migrants, ensuring that fewer need to be kept in the tent cities planned by Trump.

However, far more Central-American migrants are asking for asylum in late 2018 than in 2017. So even if Sessions delivers a much higher rejection rate, the rising tide of migrants may ensure that many migrants must be detained in the tent cities.

Sessions’ new numbers are promising, but the cartels will switch tactics, warned Andrew Arthur, a former immigration judge who works with the Center for Immigration Studies. For example, the cartels may be urging their migrant clients to claim protection under the international Convention Against Torture, he told Breitbart News. But that torture-related release loophole can be fixed by agency regulations, Arthur wrote in October.

Sessions has also reformed the court rules so that his asylum judges can reject more of the asylum requests from people who passed the Credible Fear test.

In 2016, for example, Obama’s judges denied only 33 percent of asylum requests and approved roughly 53 percent of cases.

Migrants who cross the border and ask asylum first face the three-stage “Credible Fear” test. If they fail, they are quickly deported, even if they also bring a child.

But if they pass the test and bring a child, they are usually released until their case is heard by a judge roughly two years later.

They are released because the entire asylum process takes roughly 40 days, but the 2015 Flores catch-and-release rules approved by Obama require officials to release migrants with children in just 20 days.

Getting released is the payday for the cartels and the migrants because the migrants can work legally or illegally to pay their debts to the cartel labor-traffickers. Often, the migrants will continue working until they can raise another $10,000 to pay the cartel to smuggle their spouse or a child into the United States.

This “catch, release, and work” process fuels the cartels’ labor-trafficking industry, forces down wages for blue-collar Americans, adds more foreign children to the schools needed by the children of blue-collar Americans, delivers an economic windfall to U.S. cheap-labor employers, retailers, and landlords, and it also provides progressives with cheap services plus a feeling of social superiority over their fellow Americans. The scale of the catch, release and work problem is huge: In 2017, DHS officials provided work-permits to 400,000 asylum-applicants.

The fact that few “Credible Fear” migrants win asylum from a judge is not important to the cartels, most migrants and most progressives.

It is not important because migrants can skip their court dates and remain in the economy, working illegally. That illegal work ensures the cartels get paid.

Sessions’ Credible Fear rules are much tougher than the pro-migration rules set by Obama.

Under Obama, migrants could pass the credible fear test if they told a plausible story about being a member of a group likely to be threatened by gangs or spouses:

An individual will be found to have a credible fear of persecution if he or she establishes that there is a “significant possibility” that he or she could establish in a full hearing before an Immigration Judge that he or she has been persecuted or has a well-founded fear of persecution or harm on account of his or her race, religion, nationality, membership in a particular social group, or political opinion if returned to his or her country.

Obama’s officials were also told to adopt whatever legal standard was most likely to help the migrants. For example, the training court for officers. For example, one month after Trump was inaugurated, pro-migration officials in the DHS produced training documents which said “generally the [legal] interpretation most favorable to the applicant is used when determining whether the applicant meets the credible fear standard.”

This “most favorable” language allowed the cartels’ migrants who cross the Texas border to get the benefit of pro-migrant rules set by Californian judges on the Court of Appeals for the Ninth Circuit.

In contrast,  Sessions’ reforms specifically direct officials to use legal precedents set by Texas judges if migrants cross into Texas.

Also, the new DHS instructions exclude migrants who claim a Credible Fear of persecution by gangs or spouses, even if the migrants are correct. For example, the instructions say officials should reject migrants’ claims of criminal persecution except when the “home government must either condone the behavior or demonstrate a complete helplessness to protect victims of such alleged persecution.”