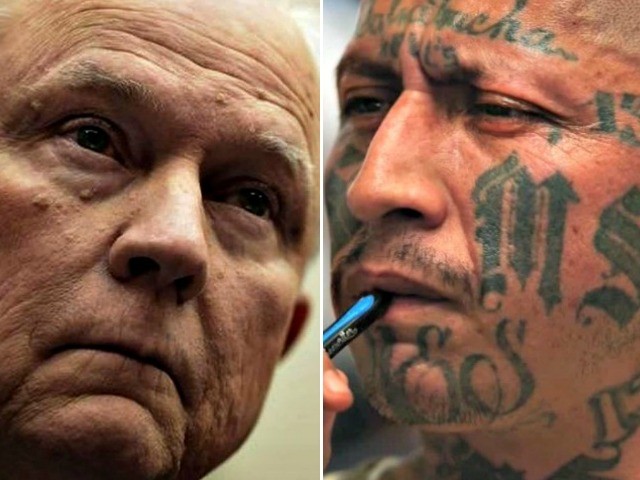 Attorney General Jeff Sessions announced on Monday a new strategy to take out the transnational gangs and drug cartels operating in the United States, including MS-13 and Sinaloa Cartel.

This action is part of fulfilling President Donald Trump’s Executive Order 13773, “which directed the federal government to “ensure that Federal law enforcement agencies give a high priority and devote sufficient resources to efforts to identify, interdict, disrupt, and dismantle transnational criminal organizations.”

“The day I was sworn in as attorney general, President Trump sent me an executive order to dismantle transnational criminal organizations—the gangs and cartels who flood our streets with drugs and violence,” Sessions said at a press conference at the Department of Justice (DOJ).  “We embrace that order, and we carry it out every single day.”

“Today, to increase our effectiveness, I am putting in place new leadership to drive our transnational organized crime efforts and forming a Transnational Organized Crime Task Force of experienced prosecutors that will coordinate and optimize the Department’s efforts to take each of these groups off of our streets for good,” Sessions said.

To execute the executive order, Sessions  directed the Federal Bureau of Investigation (FBI), Drug Enforcement Administration (DEA), the Organized Crime Drug Enforcement Task Force (OCDETF), and the Department’s Criminal Division “to identify top transnational criminal groups that threaten the safety and prosperity of the United States and its allies.”

At the conclusion of that review, Session designated the following criminal groups as top transnational organized crime (TOC) threats:

“Hovakimian has served in the DOJ leadership since early 2017 and also as an AUSA in the Southern District of California, where he is co-lead counsel in a series of transnational public corruption and fraud cases,” the press release announcing the new developments stated.

“He has also served as an Assistant United States Attorney (AUSA) for five years and as a state prosecutor in Florida for seven years,” the press release stated. “Cohen also led the National Gang Targeting Enforcement and Coordination Center for almost three years and has served as a Deputy Chief of the Narcotics and Dangerous Drug Section.”

“The Attorney General’s TOC Task Force will be led by the Deputy Attorney General and will be composed of experienced prosecutors” and  “be organized into one subcommittee for each of the target groups,” the press release stated.

The prosecutors work in jurisdictions across the United States.

Assistant U.S. Attorney John Durham of the U.S. Attorney’s Office for the Eastern District of New York will head the MS-13 subcommittee.

“Durham has played a significant role in the FBI’s Long Island Task Force, which has arrested hundreds of MS-13 members,” the press release stated.

“Reynolds has led or co-led several investigations into the Cartel that have led to indictments of some of its highest ranking members,” the press release stated.

Assistant U.S. Attorney Matthew Sutton of the United States Attorney’s Office for the Southern District of California will lead the subcommittee on the Sinaloa Cartel.

Assistant U.S. Attorney Robert Emery of the United States Attorney’s Office for the Southern District of Florida is in charge of the subcommittee on Clan del Golfo.

“Emery has secured convictions against the top leadership of Clan del Golfo, including kingpin Henry de Jesus Lopez Londoño, who commanded over 1,000 armed men for the cartel,” the press release stated.

U.S. Attorney Ilan Graff of the United States Attorney’s Office for the Southern District of New York will head the subcommittee on Lebanese Hezbollah.

“Graff is overseeing the prosecution of two alleged members of Hezbollah’s External Security Organization, the first such operatives to be charged with terrorism offenses in the United States,” the press release said.

Sessions ordered the subcommittee to submit recommendations within 90 days on “how to disrupt and dismantle TOC, whether through prosecution, diplomacy, or other lawful means.”