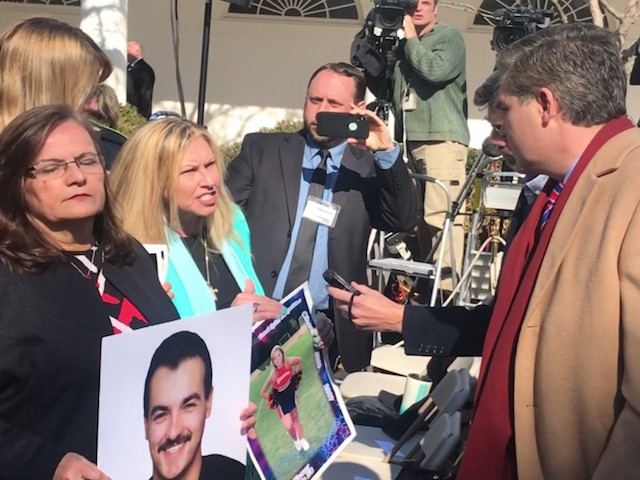 Friday while taking questions after his declaration of a national emergency President Donald Trump told chief White House correspondent for CNN Jim Acosta to “ask the Angel Moms” when Acosta questioned the need for an emergency.

Trump continued, “Do you think I am creating something? Ask these incredible women who lost their daughters and their sons, OK, because your question is a very political question. Because you have an agenda.”

Following the presidents lead the Angel Moms confronted Acosta in the Rose Garden after the press conference asking why his network was not covering their lost family members.

After an Angel Mom said, “When are you going to have us on,” Acosta replied, “I’ll do a live shot right now, and you can stand behind me.”

During his live shot on CNN Acosta said, “You saw the moment when the president pointed to some of these ladies here so they can say the crimes that happened to our family members that those are real crimes.”

Agnes Gibboney, the mother of Ronald da Silva, said, “I’m a legal immigrant. My family came through the right channels. This is my only son Ronald da Silva who was murdered by a previous deported illegal alien. We need to secure our borders to protect American citizens. President Trump is completely correct on this issue. We need to protect this country.”

Acosta said, “As we know because we have covered this for so long and there are so many passions and emotions on all sides. These ladies feel very change because of the ordeal that they went through that President Trump is on the right in this issue. You heard the president declare that he will call this a national emergency.”