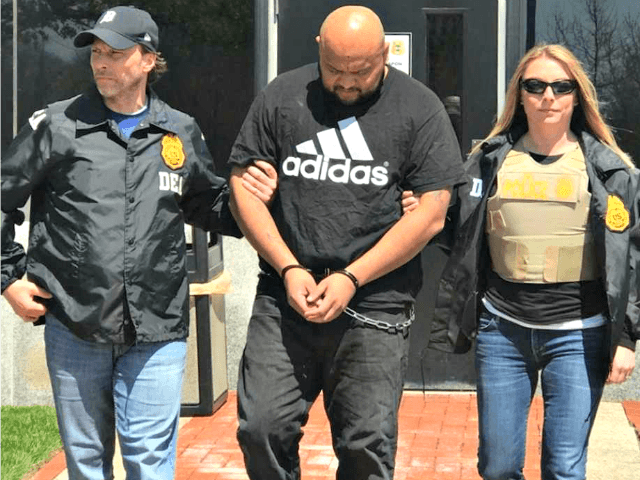 In the 2016 presidential election, “Law and order” became a hallmark of President Trump’s campaign, wherein he would routinely blast weak-on-crime politicians.

On Wednesday, Trump reversed course on his “Law and order” platform, announcing that he would support the First Step Act, which is set to reduce sentences for drug traffickers and immediately release 4,000 convicted criminals.

Just this year, in March, Trump told supporters in New Hampshire that in the midst of the opioid crisis — where drug traffickers have flooded American communities with fentanyl, cocaine, and heroin — the U.S. needed to review giving the death penalty to drug traffickers.

“These are terrible people and we have to get tough on those people,” Trump said. “Because we can have all the blue ribbon committees we want, but if we don’t get tough on the drug dealers, we’re wasting our time … that toughness includes the death penalty.” Trump continued:

The First Step Act, though, weakens the penalties for drug traffickers, potentially cutting their prison time in less than half of the current time they spend incarcerated.

In 2016, Trump blasted Obama for commuting the sentences of criminals, telling his supporters at a Florida rally:

This is what’s happening to our country. We can’t allow people to come in from very, very hostile and unfriendly territories. We have enough problems. So from Syria, with the migration, we don’t know where these people come from, there’s no way of vetting them … so here is President Obama has commuted the sentences of more men and women than the past nine presidents put together. And some of these people are bad dudes.

And these are people that are out, they’re walking the streets, sleep tight folks. Sleep tight. [Emphasis added]

Despite attacks on Obama for releasing convicted felons from prison, under the First Step Act, about 4,000 inmates will be immediately released from prison.

A year before the rally, when he was running against a slew of GOP challengers in the presidential primary, Trump told MSNBC that the U.S. needed to get “tougher” on criminals and drug traffickers, not more lenient — as the First Step Act ensures. Trump said:

Well, I have to say this, in terms of our cities and in terms of the violent offenses, we have to get a lot tougher. If you look at what’s going on with Baltimore and places like Chicago, where we have great people … you know I know the chief of police, these are fantastic people. They have to be allowed to do their job … If they’re allowed to do their job the way they know how to do it, they will stop the onslaught of crime that we have in this country.

“I think that maybe the [drug] dealers have to be looked at very strongly,” Trump said.

In February, it was rumored that Trump even supported executing drug traffickers — a plan that has been endorsed by countries like Singapore and the Phillippines.

An anonymous senior official in the Trump White House told Axios that Trump “often jokes about killing drug dealers … He’ll say, ‘You know the Chinese and Filipinos don’t have a drug problem. They just kill them.’”

White House sources said the president viewed drug dealers of the Mexican drug cartels “as bad as serial killers and should all get the death penalty.”

Unlike Trump’s past statements, the First Step Act allows heroin and fentanyl traffickers to earn early prison release credits, and will allow judges to ignore mandatory minimums for convicted rapists, murderers, and attempted murderers so long as they previously served less than a year in prison.

Over the last few months, ahead of the recent midterm elections, Trump once again made the Rule of Law a priority of his administration’s agenda, saying that it was Democrats who wanted more leniency on criminals, not him.

“Republicans believe our country should be a sanctuary for law-abiding Americans, not criminal aliens,” Trump said at a Kansas rally last month. “And Republicans stand proudly with the brave men and women of ICE, Border Patrol, and law enforcement.”

“Blue wave means crime. It means open borders. Not good. We need new laws. We need border laws, we need immigration laws — we need ‘em fast, we’re going to get ‘em. Hopefully, the midterms will help toward that end,” Trump said a few months before.

A day before the midterm elections, Trump asked Indiana voters to support Republican Mike Braun for the U.S. Senate, saying that voting for the GOP in the midterms was “a vote to keep your families safe & to keep criminals, traffickers & drug dealers OUT of our Country!”

In his urging of Arizona voters to support Rep. Martha McSally for Senate, Trump said leniency on crime and drug trafficking was her Democrat opponents’ plan and contrary to his agenda.

Arizona is such a Great State but it needs Border Security which @MarthaMcSally will provide, and Krysten Sinema doesn’t even think about. If it were up to Sinema – drugs, crime and illegal traffic will be flowing into Arizona at an ever increasing pace. Vote for Martha!

A spokesman with the National Narcotics Officers’ Associations’ Coalition has said the First Step Act “make[s] heroin and fentanyl traffickers – responsible for dealing death – eligible for good time credits that could enable them to re-enter society significantly before their sentence is served.”

“The current criminal justice reform legislation is a formula for getting more unreformed criminals – including drug dealers and jihadists – back on the streets, threatening public safety and even the national security,” Gaffney said in a statement last month. “We mustn’t go there.”

In a letter to Trump last month, the group of conservatives called the prison reform bill a “prison release” plan that is opposed by drug trafficking prosecutors.

Both political establishments have coalesced around the prison reform bill, including the George Soros-funded pro-open borders American Civil Liberties Union (ACLU) and the billionaire Koch brothers.

A list of about 50 Hollywood celebrities — nearly all opposed to Trump — have lobbied to demand the First Step Act be passed and signed into law.

“I am proud to stand with this incredible group of artists, content creators, and athletes in urging Congress to pass the First Step Act,” left-wing CNN pundit Van Jones told Rolling Stone. “Who would have thought that a plan to give incarcerated people a better chance would unite people in both parties and at all levels of society?”

The New York Times editorial board, which Trump has railed against throughout his term thus far, is likewise lobbying for the prison reform bill.