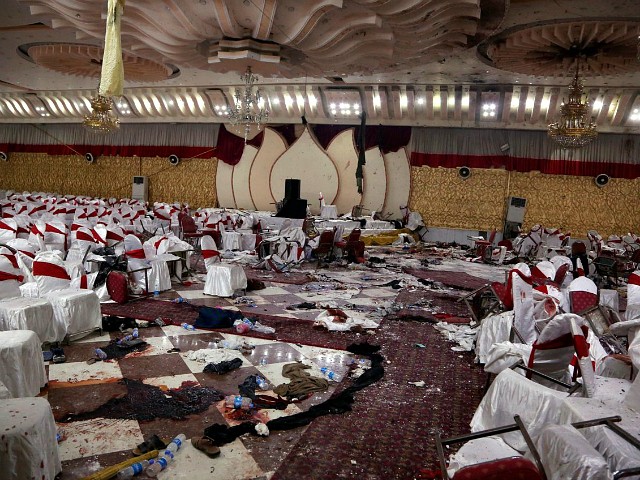 A terrorist suicide attack on a gathering of top religious figures in Kabul, Afghanistan, marking the birthday of the Prophet Muhammad this week killed at least 50 people and wounded 72 others.

Najib Danish, a spokesman for the Afghan interior ministry spokesperson, revealed, “A suicide bomber detonated his explosives inside a wedding hall where” an estimated 1,000 “Islamic religious scholars” and clerics “had gathered to commemorate the anniversary of the Prophet Mohammad’s birth.”

The heinous attack came amid a wave of bloody violence across Afghanistan in recent weeks that has killed hundreds of people amid an intensified terror campaign by the Taliban. The Taliban continues to attack despite the increased efforts by U.S. President Donald Trump’s administration and Kabul to convince the group to end the more than 17-year-old war.

Although no specific group has yet claimed responsibility and the Taliban denied involvement, both the Taliban and its Islamic State (ISIS/ISIL) rival have increasingly targeted in recent years Muslim religious scholars who disagree with them.

In June, ISIS claimed responsibility for an attack in Kabul on a gathering of the country’s top religious body known as the Afghan Ulema Council in Kabul, killing at least seven people and wounding nine soon after the Muslim chiefs issued an edict, or fatwa, against suicide bombings and urged peace talks to end the Afghan conflict.

Citing Wahid Majroh, a spokesman for the Afghan health ministry, the Agence France-Presse (AFP) agency reports that terrorists killed about 50 people Tuesday and injured at least 72 others in the blast.

The attack “targeted religious scholars and leaders inside a wedding hall where hundreds had gathered to mark the birthday of Prophet Muhammad (PBUH) — one of the holiest days in the Islamic calendar,” AFP adds.

The deafening explosion followed by “chaos” came as clerics were reciting verses from the Koran to observe the Eid Milad-un-Nabi festival that marks the birth of Islam’s prophet, Mohammad Hanif, a religious studies lecturer at the event, told AFP.

“More than 60 or 70 people were martyred,” Hanif, who escaped unscathed, also said, adding, “They suffered burns, everyone in the halls was screaming for help.”

An anonymous manager of the Uranus Wedding Palace where the incident took place indicated to AFP that “the suicide bomber blew himself up in the middle of the gathering of around 1,000 people.”

“There are a lot of casualties — I myself have counted 30 casualties,” he told AFP on condition of anonymity.

AFP notes that a photo posted on WhatsApp purportedly of the celebration room “showed blood-splattered bodies, some with clothes partially ripped off by the force of the blast, overturned chairs and broken glass strewn over the floor.”

Afghan President Ashraf Ghani described the attack on Wednesday as an “unforgivable crime.”

The U.S. and Afghan governments have made “little clear progress” in compelling the Taliban to negotiate a deal to end the war, a new U.S. assessment by the Pentagon’s inspector general (IG) unveiled this week determines, noting that that the conflict remains locked in a stalemate.

“Progress toward peace remains elusive,” the IG noted in an introduction to a comprehensive review of military, political, and humanitarian conditions in Afghanistan during the July-September period, the first three months of the war’s 17th year.

The Afghan war has been raging since October 2001 at a cost to American taxpayers of $975 billion and more than 105,000 deaths including U.S. troops, contractors, Pentagon civilians, Afghan security forces, civilians, journalists, and humanitarian workers, according to the most recent assessment by Brown University’s Cost of War Project.