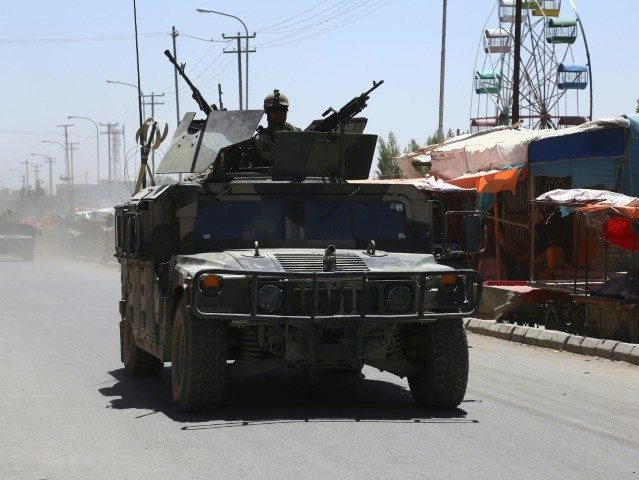 The attacks came ahead of a potential second round of peace negotiations between the Taliban and the U.S. in the United Arab Emirates (UAE) this week.

Between late Sunday and today, the Taliban targeted the ANDSF in western Farah province, located along Afghanistan’s border with Iran, and in the northern regions of Badghis and Baghlan.

“A group of Taliban fighters first targeted checkpoints in the district of Push Rod, where 10 policemen died. Another attack struck in Bala Buluk district, where seven were killed and at least three others were abducted by the insurgents. Separately, also in Bala Buluk, six policemen surrendered to the Taliban after an intense battle,” the Associated Press (AP) noted.

According to the U.S. military, state sponsor of terrorism Iran assists the Taliban.

Local officials have accused the Shiite Islamic Republic of aiding the Taliban in Farah province.

On Monday, the terrorists attacked the northern provinces of Badghis and Baghlan, killing 10 ANDSF troops, including a police commander.

The incident in Badghis occurred near the provincial capital of Qala-i-Now. In Baghlan, the jihadists targeted a joint army and police base.

“The base is under the control of the Afghan security forces now and reinforcements have also been sent to the district,” Gen. Ekramuddin Serih, the provincial police chief, declared, AP noted.

Deadly Taliban attacks have continued undeterred in recent months despite the terrorist group’s alleged desire to engage in peace negotiations to end the nearly 17-year-old war in Afghanistan.

Last week, he arrived in the United Arab Emirates (UAE) for the second round of direct negotiations with the Taliban, NBC News reported, citing anonymous Taliban officials.

The discussions would follow July’s meeting in Qatar during which Taliban envoys met Alice Wells, the U.S. State Department’s principal deputy assistant secretary for the Bureau of South and Central Asian Affairs.

Top Trump administration officials have deemed Afghan-led reconciliation between Kabul and the Taliban the primary goal of the U.S. strategy to end the ongoing conflict.

In the wake of a historic ceasefire in June, the Trump administration has agreed to participate in peace talks directly.

The U.S. has intensified its efforts to broker negotiations between Kabul and the Taliban, which the American military removed from power in Afghanistan in late 2001 for harboring Osama bin Laden as he plotted the 9/11 attacks.

Afghan President Ashraf Ghani has offered the Taliban a permanent truce and official political recognition, but so far the terrorist organization has refused the offer.

Taliban jihadists insist on the complete withdrawal of foreign troops as a condition for talks with Kabul. The terrorists are also demanding the release of hundreds of prisoners for continuing negotiations with the United States, NBC News reported.

Currently, the negotiations are primarily revolving about the future presence of foreign troops in Afghanistan.

Negotiations between the United States and the Afghan Taliban for a political settlement to end the protracted war in Afghanistan are stuck over the issue of maintenance of U.S. military bases in the country, according to Waheed Muzhda, a former Taliban official in Kabul who remains in regular contact with Taliban leaders.

He said the Taliban did show some willingness to allow foreign troops to train Afghan forces, but only if a new government formed after a negotiated settlement, that would likely include the Taliban, agreed to their presence.

According to VOA, the United States wants to keep at least two military bases, something that the Taliban has so far declined to accept.

For years, the U.S. refused to abide by any preconditions for peace negotiations.

The United States has also maintained that Kabul must lead the peace negotiations. Anything short of that would confirm the Taliban terrorists’ assertions that the Kabul government is an illegitimate U.S. “puppet regime.”

U.S. Secretary of State Mike Pompeo has said the Trump administration is willing to discuss “the role of international actors and forces” in Afghanistan as part of peace negotiations.

Afghanistan is also home to jihadists from al-Qaeda, the Islamic State (ISIS/ISIL), and other terrorist groups.