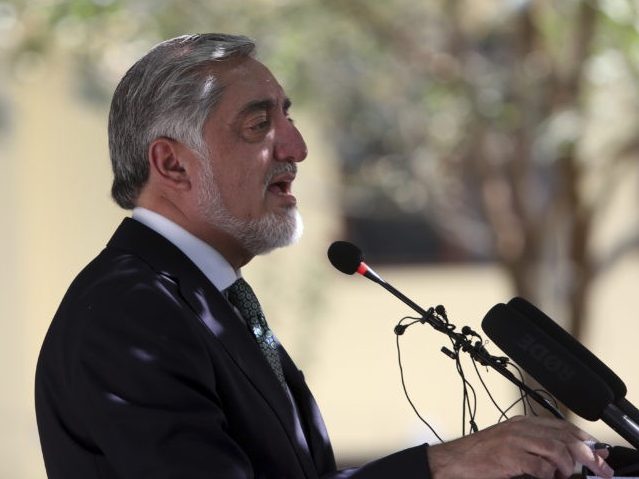 Chief Executive of Afghanistan Abdullah Abdullah told the United Nations General Assembly on Wednesday that Kabul in the last year has made an “unprecedented” offer of unconditional peace talks to the Taliban as well as the chance to operate as a legitimate political group.

Abdullah, who rules Afghanistan with President Ashraf Ghani as part of a unity government agreement, told the U.N. General Assembly in New York:

Since we last met [last year], Afghanistan has turned a page and made unprecedented overtures to the Taliban to be part of a credible Afghan-owned and Afghan-led peace process that could lead to a just and comprehensive political settlement through talks and
reconciliation.

On several occasions, we have pledged our commitment to unconditional intra-Afghan dialogue and the restoration of all rights and privileges for those who agree to end the cycle of violence. We even announced a unilateral ceasefire earlier this year that was agreed to by the Taliban for a three-day period and gave the Afghans a glimpse of what peace can look and feel like.

Although Kabul has been unable to replicate a subsequent truce, Dr. Abdullah noted that the Afghan government “will not rest” until it achieves peace.

CEO Abdullah’s comments echoed President Ashraf’s U.S.-backed offer to the Taliban of an unconditional ceasefire and recognition as a legitimate political party.

U.S. troops overthrew the Taliban regime that ruled Afghanistan when it invaded the country in 2001.

The Taliban, which controls or contests nearly half of the country, has so far refused Kabul’s peace offer. However, the jihadi group did engage in negotiations with the United States this year in a reversal of a longstanding American policy that peace talks must be Afghan-led.

The U.S. insists the process will remain under Kabul’s leadership. Afghanistan appeared to welcome the meeting as an effort to facilitate negotiations between Kabul and the Taliban.

In July, a delegation led by a top U.S. Department official, Alice Wells, met with the Taliban in Qatar, home to the terrorist group’s political office.

“You can’t call it peace talks,” he added. “These are a series of meetings for initiating formal and purposeful talks. We agreed to meet again soon and resolve the Afghan conflict through dialogue.”It remains unclear when the U.S. will meet with the Taliban again.”

The meeting came soon after the Taliban renewed its call for direct negotiations with the U.S.

In recent months, the Trump administration has intensified its efforts to bring the Taliban to the negotiating table with Kabul.

Despite the ongoing efforts, the Taliban continues to wreak havoc in Afghanistan.

U.S. President Donald Trump increased the U.S. military footprint in Afghanistan and stepped up airstrikes targeting terrorist groups in the country, namely the Taliban and the Islamic State (ISIS/ISIL).

Nevertheless, U.S.-backed Afghan security forces have been unable to break the battlefield stalemate and pressure the Taliban to come to the peace negotiating table.

The Trump administration deems “reconciliation” between Kabul and Taliban the main goal of its strategy to end the war in Afghanistan, which has been raging since