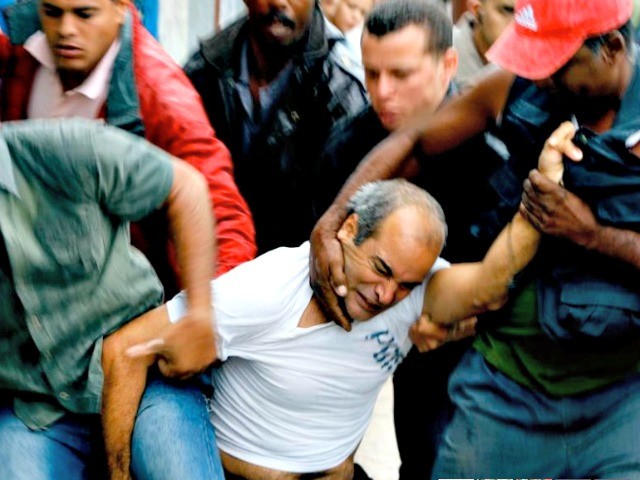 WASHINGTON, DC — The international community has turned a blind eye to the ongoing human rights abuses committed by Cuba’s communist regime throughout its 60-year tenure, Carlos Ponce, the director for Latin America programs at Freedom House, declared during an event hosted by the Organization of American States (OAS) Friday.

Ponce participated in several panel discussions during the event, which was focused on human rights abuses in Cuba, home to the oldest dictatorship on the Western Hemisphere.

The OAS featured over 20 panelists – including experts, witnesses, and former prisoners – who shared their knowledge and experience about human right abuses in Cuba.

Cuba’s communist regime “is a criminal mafia that has been harassing Cuba for the last six decades. There has been a very unacceptable international complicity,” Ponce proclaimed.

“The international community can not continue to ignore this crime that is committed against Cubans,” he noted, alluding to “daily” human rights abuses.

Cuba’s “cancer has to be cut out,” Ponce concluded, referring to the communist country’s “criminal” regime.

According to the panelists, Cuba is still holding an estimated 140 political prisoners who continue to be subjected to starvation and other forms of torture.

“The 140 male and female [political] prisoners are forced to live in overcrowded cells, subjected to hunger, lack of medical assistance, beatings, and slave work while barefoot, semi-naked, malnourished, [and] hungry,” Luis Almagro, the OAS chief, revealed.

Prisoners are “forced to work even when they are sick otherwise they are beaten and taken to isolation and punishment cells,” he added.

During the event, Luis Zúñiga, a former political prisoner, told Breitbart News that Cuba continues to systematically employ starvation and dehydration as a mechanism to break political prisoners physically and mentally.

Cuba’s oppression is not confined to the prison cells. It extends into all segments of society, the former detainees and experts contended.

“Repression in Cuba is all-inclusive, absolute, systematic, and institutional … In Cuba, repression is in schools, it is everywhere. It covers all of society,” Pedro Corzo, a former political prisoner, said during a panel discussion at the OAS event.

Almagro vowed that OAS will continue shedding light on communist Cuba’s atrocities against its own citizens and expressed support for bringing Castro officials to justice via an international tribunal as proposed by Justice Cuba.

At OAS, Justice Cuba international commission presented testimony from former political prisoners who have witnessed the torture and atrocities by the Cuban government first-hand.

Justice Cuba compiled legal evidence against the Castro regime’s most prominent officials to bring them to justice at an appropriate tribunal.

“We must continue to denounce this situation to bring hope to all those in Cuba who demand their political and human civil rights and who dream of a free and democratic Cuba,” he added.

Almagro said the OAS will work to tackle the abuses at the hands of the “illegitimate” Cuban regime.

OAS hosted an unprecedented day-long event on Friday offering an international platform to victims of the Cuban communist regime’s crimes against humanity.

Justice Cuba announced that it had completed the investigation phase of its efforts, noting that it is currently in search of a tribunal that can successfully try Cuban government officials accused of torture and other atrocities against the population on the island.