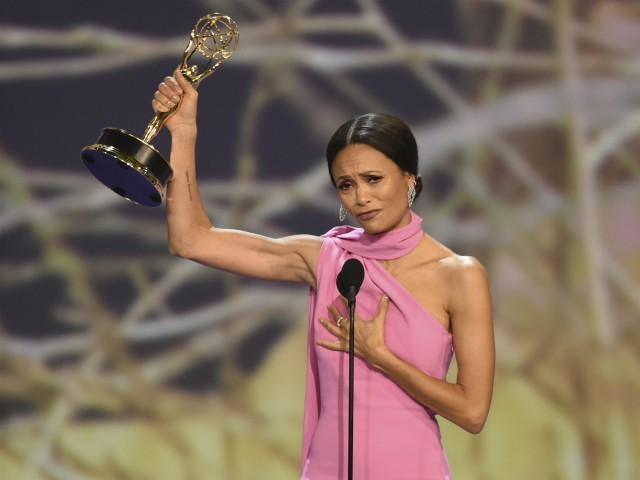 Actress Thandie Newton said that she didn’t “even believe in God” but would “thank her” anyway after she won an Emmy award for her role on Westworld.

“I don’t even believe in God but I’m going to thank her tonight,” Thandie Newton said, implying that God is a woman.

#Westworld star @thandienewton wishes her daughter a happy birthday during #Emmys acceptance speech: “I get to guide you and love you and protect you.” pic.twitter.com/UfqIKSeJbH

That wasn’t the only inflammatory remark made during Monday night’s Emmys–the event was full of political commentary.

Co-host Colin Jost made a joke about Nazis, saying, “I don’t know if you know this–the first Emmys were held back in 1949. Things were very different back then–gas was 17 cents a gallon, a new home cost $7,000, and we all agreed that Nazis were bad.”

Roseanne Barr was also targeted. Co-host Jost joked that “Roseanne was cancelled by herself, but picked up by white nationalists.”

“I heard Roseanne is actually moving to Israel. I mean, damn,” co-host Michael Che said. “How messed up is your life when you have to go to the Middle East just to get peace of mind?”

Che also commented on racism in America while talking about the Hulu show The Handmaid’s Tale.

“I don’t know if you’ve seen it, The Handmaid’s Tale takes place in an imaginary future where an entire group of people are violently forced to work and make babies against their will. It’s what black people call ‘history.’ It’s Roots for white women, that’s what it is,” Che said.