Turner attended the protest in Mammoth Lakes, CA, with her husband, singer Joe Jonas of the Jonas Brothers, and posted two photos and a video from the event to her Instagram account. The video shows her holding the “White Silence Is Violence” sign and chanting, “No justice, no peace.” 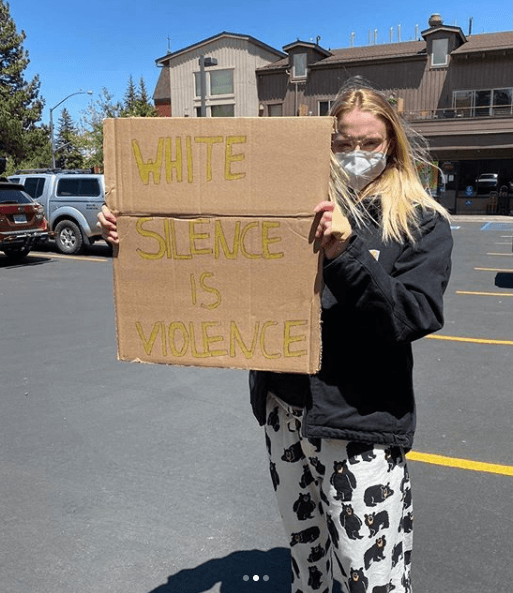 One of the photos shows protesters lying flat on the ground with their hands behind their backs in homage to George Floyd, a black Minneapolis man who was killed by a white police officer during an arrest when the officer kneeled on the neck of the prostrate Floyd.

Turner captioned this photo: “We stand, we kneel, we lay down with you.”

One of her Instagram followers wrote in reply to this: “I mean they’ve been arrested and charged with murder so there’s justice, soooo can we have peace now?” The fan was likely referring to the four police officers who have now been charged in Floyd’s death.

Turner has recently become more vocal on social media in support of the Black Lives Matter movement, according to the Daily Mail.

The 23-year-old X-Men star, who is pregnant with her first child, has taken particular interest in a story involving an allegation of police brutality towards a pregnant California woman, Emerald Black, who claims that police officers in San Leandro, CA, caused her to have a miscarriage after they stomped on her stomach during a traffic stop. Black is now suing the city, and Turner has shared links on Instagram to a petition calling for an investigation into the case.