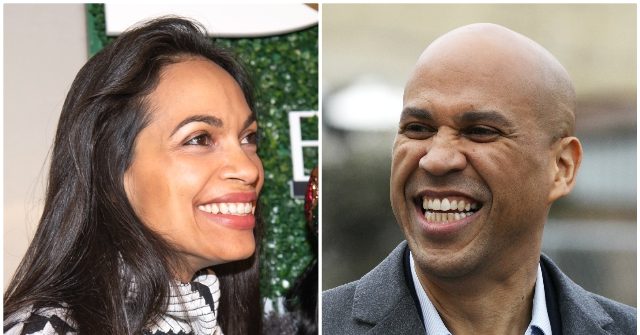 Hollywood actress Rosario Dawson joined reputed beau, Democrat candidate for president Cory Booker, on the campaign trail in Nevada on Independence Day. It marked the first time the two were seen together on the hustings.

Dawson, 40, was criticized for not appearing at last week’s debate to support Booker during what was arguably his most important campaign appearance to date. Dawson said that her work in New Mexico on the USA Network project, Briarpatch, kept her from attending.

Delighted to get to meet a sister vegan @rosariodawson at @CoryBooker event pic.twitter.com/6qKoYvM8aw

Since October, both Cory Booker, a Democrat New Jersey Senator, and Dawson have talked of their relationship, but glimpses of them together have been somewhat sparse. Booker even hinted that they may soon be engaged.

In an interview with drag queen Ru Paul in June, Paul noted that Booker could be the first bachelor president in a long time. But Booker noted that something could happen to prevent that.

“Well, the swearing-in isn’t until the 21st of January 2021,” Booker replied to Paul’s bachelor president claim. “You never know what might happen between then and now.”

Booker’s stops in Nevada on Thursday included an Independence Day celebration at the 71st annual Boulder City Damboree and the Rotary Club Pancake breakfast in Boulder City. It is his fourth campaign stop in the Silver State.
Follow Warner Todd Huston on Twitter @warnerthuston.