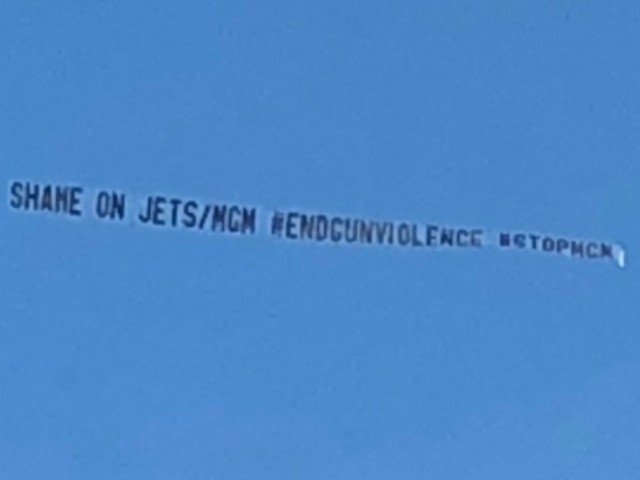 Hours before the New York Jets played the Bills on Sunday, a group of activists flew a banner over the team’s stadium urging them to support gun control.

The impetus was the Jets recent agreement making MGM Resorts International an official partner of the Jets.

The Associated Press reports that the agreement between the Jets and MGM is “the most comprehensive and integrated gaming partnership in the league, and the first to go beyond a casino sponsorship.”

On July 17, 2018, Breitbart News reported that MGM was suing victims of that attack in order to prevent them from claiming MGM bore liability in the incident.

MGM has since backed off the suit, and is in discussion for a settlement.

I strongly disagree with @nyjets partnering with @MGMResortsIntl. The @MGMResortsIntl decision to sue the victims of the Mandalay Bay Shooting in Las Vegas is a complete disgrace! The @nyjets SHOULD NOT move forward #STOPMGMhttps://t.co/wKU8KC9sjm

On November 4, 2018, Breitbart News reported that Sen. Parker was one of the NY state Democrats pushing for a social media background check for all would-be gun buyers.

Under Parker’s plan, a check into the last three years of posts on Facebook, Twitter, and Instagram, would be added to the retail background check to be sure individuals wishing to buy a gun had not used hate speech.

On Thursday, the day after the attack on Thousand Oaks, California’s Borderline Bar & Grill, the Los Angeles King adopted Michael Bloomberg’s gun control mantra “Enough,” wearing a decal on their helmets and carrying signs. And wheres NY Sen. Parker did not define hate speech, the Kings did not mention what type of gun controls ought to passed in a state that already has every gun control imaginable.