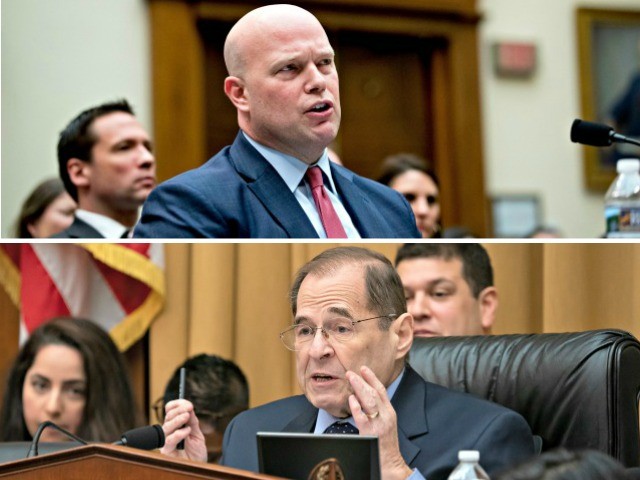 House Judiciary Committee Democrats and acting Attorney General Matthew Whitaker faced off Friday during a contentious six-hearing hearing that focused primarily on whether he or President Trump had ever tried to interfere with the special counsel investigation.

The showdown began on Thursday, when Democrats on the committee voted to give committee Chairman Jerry Nadler (D-NY) the authority to subpoena Whitaker to appear on Friday, despite Whitaker having already agreed to do so.

The move threw Whitaker’s appearance the next morning into uncertainty. The Justice Department said Whitaker would not testify unless Democrats assured him that they would not issue a subpoena. The issue was worked out by Thursday evening, and Whitaker appeared voluntarily as planned.

But the antagonism between House Democrats and Whitaker was on full display throughout the hearing on Friday.

Whitaker infuriated Democrats by not giving “yes” or “no” answers, referring them to other departments such as the Department of Homeland Security (DHS), and at times challenging their questions.

At one point, after Nadler asked him a question, Whitaker responded, “Mr. Chairman, I see that your five minutes is up,” drawing gasps and laughter from the room.

Whitaker also reminded the committee that attorney general nominee William Barr would likely take over his job as attorney general in a week, and scolded lawmakers for not asking him about the Justice Department’s work on violent crime, the opioid crisis, religious liberty, and free speech on college campuses.

The committee’s top Republican, Rep. Doug Collins (R-GA), blasted the entire hearing — which he said was supposed to be about oversight of the Justice Department, but was really about “character assassination” and an attempt to attack the president.

“If this is the way we’re going to go, then we’ll have plenty of stunts, plenty of theatrics, bring your popcorn, I’m thinking maybe set up a popcorn machine in the back, because that’s what this has become, it’s becoming a show.”

Democrats spent much of the hearing grilling Whitaker on why he did not recuse himself from overseeing the special counsel investigation when he was appointed acting attorney general, what conversations he had with the president about the investigation, and whether his opposition to the special counsel before he took the job played a role in his appointment.

Whitaker refused to discuss his private conversations with the president but did testify that it was his decision to make whether he recused himself, that he has not briefed the president or any senior White House official on the special counsel investigation, and that he has not taken any actions to interfere with the special counsel’s investigation.

He also testified that as a private citizen he never shared his views with anyone at the White House, or any one of the president’s surrogates, such as his lawyer Rudy Giuiliani.

Still, they warned him not to interfere with the investigation in the several days he had left before the Senate confirms William Barr as attorney general next week.

House Democrats also berated Whitaker on the administration’s immigration policy and about family separations at the border.

“Your department was not tracking parents who were separated from their children. Do you know what kind of damage to children and families across this country, children who will never get to see their parents again — do you understand the magnitude of that?” Rep. Pramila Jayapal (D-WA) asked.

Some sought to dress Whitaker down further. Jeffries asked “how the heck” he became acting attorney general.

.@RepJeffries: “I’m confused, I really am. We’re all trying figure out who are you, where did you come from and how the heck did you become the head of the Department of Justice.”

Jeffries: “Mr. Whitaker, that was a statement not a question.” pic.twitter.com/WbYCwpcwiN

Whitaker was the former attorney of the southern district of Iowa and former chief of staff for then-Attorney General Jeff Sessions.

Democrats expressed dissatisfaction with Whitaker’s testimony, with Nadler concluding the hearing by telling Whitaker he is planning to call him back for an interview, by subpoena if necessary.

Trump critics and leftists mocked Whitaker as “unqualified and ignorant.”

He might be so unqualified and ignorant that he fears public humiliation. He might have engaged in improper collaboration with Trump in trying to slow down the investigation or ferret out information helpful to Trump or Trump cronies. https://t.co/byYU4uwiPj

However, conservatives declared the hearing a win for Whitaker:

Whitaker really held his ground under the hostile questioning of Democrats: Acting AG Whitaker “I have not talked to the President of the United States about the special counsel’s investigation” https://t.co/tYaN7CQItY via @SaraCarterDC

Whitaker was unflappable. This new socialist dem house majority does not seem ready to demonstrate their careful competence. They seem more like campus radicals.

Haven’t seen it all, but have dropped in and out of Whitaker hearing today. Some very angry Democrats. Seem furious that Whitaker has not interfered with Mueller investigation.