Sweden has the worst border control of any nation in Europe’s free movement zone, according to a leaked report seen by a major national newspaper that was reportedly suppressed to prevent the findings influencing the outcome of this month’s Swedish election.

Border agents in the Nordic nation only receive very basic training, are not told how to spot forged documents, and do not check for returning jihadist fighters, an inspection of the nation’s key entry points made in 2017 found.

Sweden Blocks Request for Data on Link Between Crime and Immigration https://t.co/IoQwkATITh pic.twitter.com/VfXnytCzBf

The assessment was made as part of a report for the European Union’s Schengen area, a group of 26 European states that technically allow free movement between each other’s territory. Sweden’s Kvällsposten [Evening Post, part of best-selling daily the Expressen] published snippets of the English language report, titled ‘Evaluation of Sweden in the field of management of external borders’, including the finding that there was a “lack of skills” at the border.

The newspaper reports in a remarkable admission of government failure that “there is no actual border control”, and the remarks of experienced border officers who described new guards getting just nine weeks of training but who have no knowledge of immigration law. Among the findings in the Schengen report are that Swedish border guards do not know how to detect false passports, that Sweden’s busiest airport is the least organised and fails to check whether people landing in the country are known terrorists, and that borders are poorly manned.

Altogether, the report found that Sweden’s “deficient” border control was the worst in Europe. 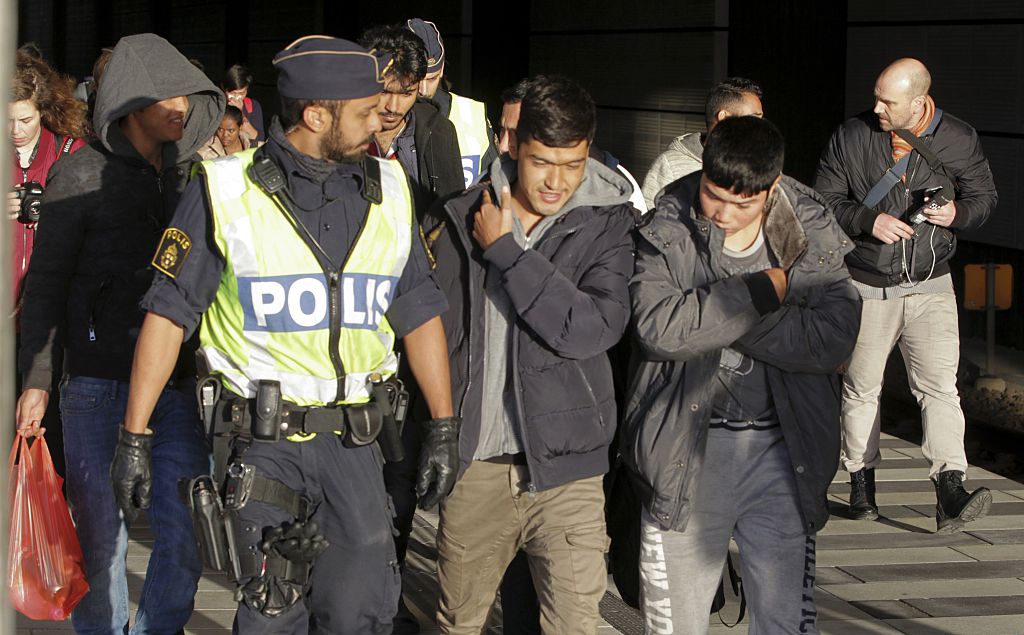 A group of migrants off an incoming train walk down a platform as they are accompanied by the police at the Swedish end of the bridge between Sweden and Denmark near Malmoe on November 12, 2015. The Swedish government on November 11, 2015 said it would temporarily reinstate border checks to deal with an unprecedented influx of migrants, making it the latest country in Europe’s passport-free Schengen zone to tighten its borders over the crisis. / STIG-AKE JONSSON/AFP/Getty Images

In a follow-up to the spectacular leak, the newspaper reports further officers have now come forward to blow the whistle on Sweden’s porous borders, with one telling the publication the revelations so far are “an understatement”.

While the fact that Sweden is unable to control its own borders may not have shocked many, the claim that the report was hushed up that came with the leak may have more political implications. The Kvällsposten quotes “several” border police officers who said the report was buried, with at least one claiming to have been at a meeting with the chief of border police Lisa Strøm, who it is reported said the report was so politically sensitive it had to be withheld until after the election.

Sweden’s general election of September 9th was widely considered to have been fought over the nation’s response to mass migration and had the report been released earlier it could have given a boost to the populist-right, anti-mass migration Sweden Democrats.

Both the border chief of police and the Social Democrat Justice Minister Morgan Johansson denied the confidential report had been withheld.

The leak comes at a sensitive time, following both the national elections which saw no credible government emerge, and the call by the father of a child killed by an Islamist illegal immigrant for a public inquiry into how a failure to control migration led to the death of his daughter.

Breitbart London reported on the appeal of Stefan Åkerlund, whose 11-year-old daughter Ebba was killed in the 2017 Stockholm terror attack by Islamic-State inspired failed asylum seeker Rakhmat Akilov, when he said “authorities that did not do their job” may have contributed to his daughter’s death.

Calling for public officials to be investigated and those who allowed Akilov to remain at large to be punished, Åkerlund said in an opinion piece for Sweden’s best-selling newspaper: “The fact that the Migration Board and the Police did not do their job and deport a person who was here illegally, resulted in my daughter losing her life which forever destroyed my own.”