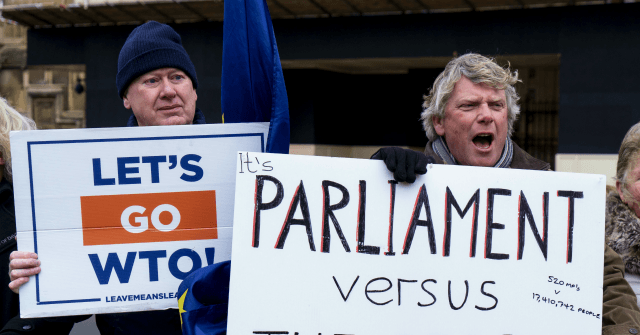 More than nine in ten (92 per cent) Leave voters feel ‘betrayed’ by the way the government has handled Brexit, while two-thirds of all voters feel the same.

The ComRes poll, commissioned by the ‘Leave Means Leave’ group and published in The Sun on Monday, also found that 60 per cent of all voters, both leave and remain, said that Brexit had damaged their trust in politics.

The poll also found that 57 per cent of Britons believe that the UK should be leaving the EU on World Trade Organization (WTO) terms instead of delaying Brexit.

This number has been seen a significant increase since January when a Sky Data poll found that out of leave options, 39 per cent backed a WTO exit, while a March ComRes poll put the figure supporting a no-deal Brexit at 41 per cent.

The disastrous handling of Brexit is causing considerable distrust in the overwhelmingly remain-supporting political establishment, with January’s Sky Data poll finding 60 per cent of Britons believe that those MPs trying to delay Brexit are trying to stop its implementation altogether.

The ComRes poll taken late March, after MPs had voted to take control of the Brexit process from the government, found that 20 per cent of Britons have gone as far as to say that they will never vote again if Brexit is not passed.

The polls come amid a turbulent few weeks in Westminster, with Prime Minister Theresa May’s Withdrawal Agreement failing to pass in the House of Commons for a third time and MPs voting down every alternative version of Brexit in a series of indicative (non-binding) votes.

Labour leader Jeremy Corbyn has called for a general election. In such an event, however, an aggregate of polling data by data analyst John Curtice reported by The Telegraph shows that the impasse would not be broken as the Conservatives would win 300 seats, remaining the largest party but 26 short of a majority.

Even a deal with Northern Ireland’s conservative Democratic Unionist Party (DUP), which currently has ten seats, would not be enough to secure backing in the Commons. Labour, meanwhile, would win 263 seats and would need deals with multiple other parties including fervent remainers the left-wing, pro-open borders Scottish National Party (SNP).