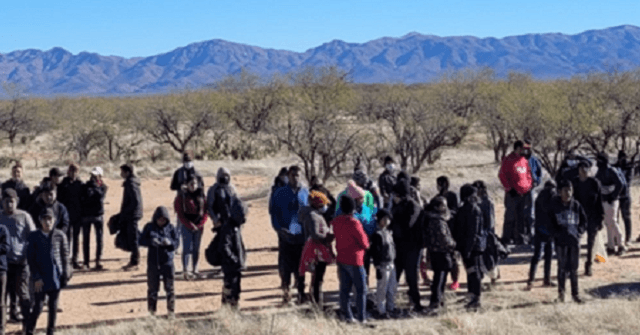 Tucson Sector Border Patrol agents apprehended 70 unaccompanied migrant minors who illegally crossed from Mexico to Arizona over the weekend. The children were part of a large group of 112 overall.

Tucson Sector agents encountered 112 migrants near San Miguel, #Arizona, all originating from Central American countries. Of that, 70 were unaccompanied #children. All migrants were transported and processed according to current guidelines. pic.twitter.com/49BXCYz1Ge

Also over the weekend, Nogales Station agents had to extract a human smuggler and six migrants from a van involved in a rollover crash. “Smugglers use reckless tactics to avoid apprehension, putting migrants in extreme danger,” Chief Modlin tweeted.

Near I-19, a U.S. citizen and six migrants were extracted from a #vehicle by Nogales Station agents. No serious injuries were reported. The case was turned over to @HSIPhoenix. pic.twitter.com/r9bS0NyK7R

Chief Modlin also reported the arrest of an armed human smuggler. The agents stopped a vehicle near the interchange of Interstates 8 and 10. The agents found five migrants being smuggled after they illegally entered the U.S.

Tucson Sector agents continue to encounter smugglers in possession of a #firearm.

A U.S. citizen smuggling five migrants faces prosecution after Casa Grande Station agents stopped him near the I-8/I-10 interchange. A loaded 9mm #pistol was seized from the glovebox. #GoodWork pic.twitter.com/n91w45MVQq

While searching the vehicle, agents found a loaded pistol in the glove box, he stated.