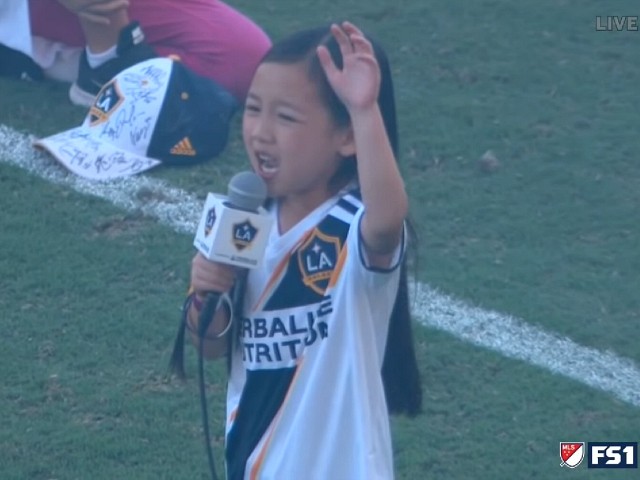 A seven-year-old girl wowed a crowd of 25,000 fans with her performance of the national anthem at a Major League Soccer (MLS) game on Sunday night.

Malea Emma Tjandrawidjaja belted out “The Star-Spangled Banner” in front of more than 25,000 spectators gathered to see the LA Galaxy take on the Seattle Sounders Sunday night at the StubHub Center in Los Angeles.

The seven-year-old was selected as the winner of the LA Galaxy’s inaugural #GalaxySocial national anthem contest.

7-year-old @maleaemma just won the #GalaxySocial National Anthem contest and her reaction will hit you right in the feels 😭😭😭 pic.twitter.com/FnyFLSgQha

The announcer introduced the singing prodigy as “tiny but mighty” before she took the field, captivating fans with her performance of the national anthem.

“I was thinking that I cannot do anything wrong because it’s a really special song to America,” Malea Emma told ABC News Monday.

Social media users showered praise upon Malea Emma following her performance, including Galaxy forward Zlatan Ibrahimovic, calling her the “MVP of the game”:

MVP of the game! https://t.co/eZ2WdQsVN7

Malea Emma, a native of Los Angeles, has had several brushes with stardom at a young age. Her father said she has been singing since she was one year old and has been entering talent competitions in downtown Los Angeles since the age of three.

At five years old, she performed at Carnegie Hall after she won the American Protégé International Vocal Competition.

“She’s been singing forever, basically before she could speak,” her dad, Arman Tjandrawidjaja, told USA Today. “Sometimes we have to tell her to be quiet.”

The second-grader has a YouTube channel and an Instagram account with more than 16,000 followers. Malea Emma told CBS News she practices with her father, who also serves as her vocal coach, and she hopes to be a “singer, doctor, actress and violinist” when she grows up.