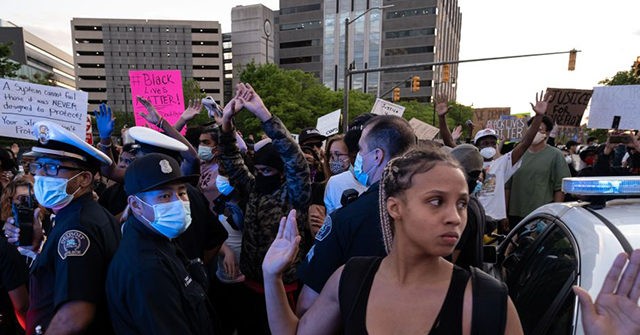 One man was shot and killed and 61 protesters were arrested in downtown Detroit after tensions escalated between protesters and police officers over the riots concerning George Floyd’s death.

At 11:30 p.m. on Friday, a 21-year-old was shot and killed after an unknown person approached a silver Dodge Caliber sitting in a parking lot. The car had the victim and two other men inside, Fox 2 Detroit reported.

The unknown suspect began opening fire into the car, and at some point, the victim was shot while the other two men fled the scene, police said.

Detroit police said the wounded man succumbed to his injuries and died at the hospital.

Police arrested 61 protesters and used tear gas and pepper sprays to thin out the crowds in some areas. One Detroit police officer was injured after a protester allegedly hit him with a rock during the early part of the protest.

A second officer was almost run over while on a bicycle, but that driver was arrested.

About 1,500 people in Detroit came to show their outrage over the death of George Floyd, joining a host of other cities from St. Louis, Missouri, to Oakland, California, to protest the manner in which Floyd died after a Minneapolis police officer pinned his neck using his knee for nearly ten minutes.

Four officers were fired since that incident, and one of the officers, Derek Chauvin, was charged with third degree murder and manslaughter less than 50 minutes after his arrest was made public.