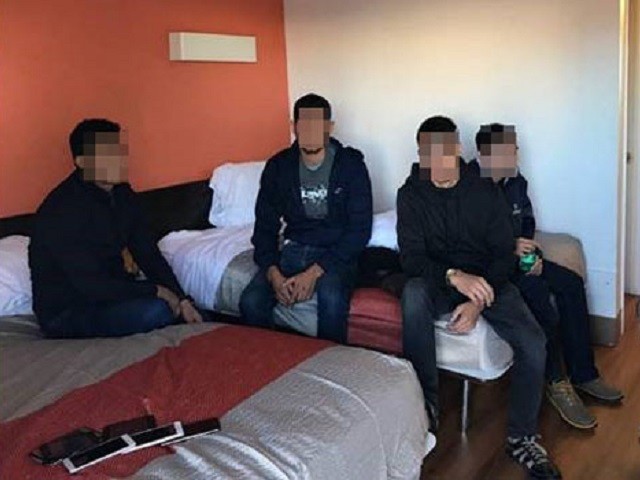 Border Patrol agents in the Rio Grande Valley Sector discovered more than 60 illegal aliens, mostly from Central America, in stash houses near the Texas border with Mexico on November 1. The agents found the migrants in two separate incidents.

Rio Grande City Station Border Patrol agents received a call from the Roma, Texas, Police Department requesting assistance. The local police received a tip about a house being used to warehouse a group of migrants who had recently crossed the border illegally from Mexico, according to information provided to Breitbart News by Rio Grande Valley Sector Border Patrol officials.

The agents responded to the area and met with the local police officers before moving on to the suspected human stash house. Roma police officers approached the residence and carried out a “welfare check” to see if there was any trouble in the home. After making entry into the home, officers and agents found 49 suspected illegal aliens packed into the small house.

The agents place all of the migrants in custody and transported them to the Rio Grande City Station for processing.

Cartel-connected smugglers use stash houses to stage large quantities of what they regard as human cargo after they illegal cross them into the U.S. from Mexico, officials previously told Breitbart News. The smugglers then schedule a time to move the migrants north to attempt to circumvent inland Border Patrol immigration checkpoints.

Frequently the smugglers will violently attack the migrants and hold them for ransom in order to extract additional smuggling fees before moving north. Men are frequently beaten and robbed, officials stated, while females are often locked into separate rooms where they can be abused or raped by the smugglers as a method of intimidation.

A few hours after the initial find, Border Patrol agents teamed up with Texas Department of Public Safety troopers and police officers from the city of Hidalgo, Texas, to shut down another human smuggling operation. This time, smugglers chose a motel room to stash 10 illegal aliens.

The law enforcement team entered the motel room and found 10 migrants stashed inside. The Border Patrol agents conducted an immigration interview and learned the migrants were all from the country of China.

Two days earlier, Laredo Sector Border Patrol agents raided another motel being used as a warehouse for human cargo. The agents assigned to teh Joint Taskforce West, South Texas Corridor Joint Targeting Team teamed up with DPS troopers and officers from the Laredo Police Department to carry out the raid.

The agents found 10 illegal aliens from a wide variety of countries stashed inside the small room, Laredo Sector officials said in a written statement. Agents said the group was composed of three Mexican nationals, one Salvadoran, two Hondurans, two Brazilians, and two from Nicaragua.

All of the migrants will be processed according to their respective sector’s policies.