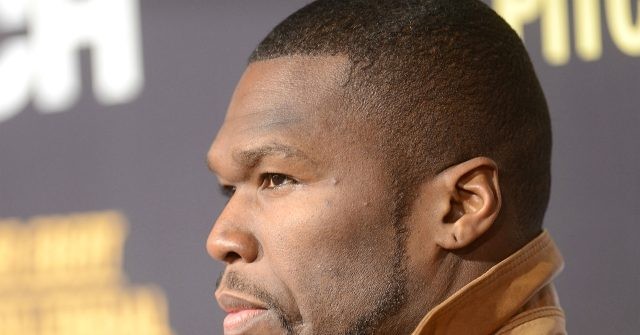 Grammy-winning rapper and actor 50 Cent doubled down on Tuesday after ripping Joe Biden’s “very bad” tax plan, which could have New York City taxpayers earning more than $400,000 paying a combined state and local income tax rate of over 60 percent. In a tweet to his 12 million Twitter followers, the New York native jokingly said that he does not want to become “20 Cent.”

“Yeah, i don’t want to be 20cent. 62% is a very, very,bad idea,” the “Get Rich or Die Trying” crooner wrote in a tweet alongside a clip of a Fox News segment discussing his departure from the Democrat Party narrative typically advanced by Hollywood celebrities.

50 Cent, whose real name is Curtis Jackson, made waves on Monday after blasting Biden’s tax plan on social media. The Harris-Biden plan could see earners making over $400,000 paying a combined federal and state tax rate as high as 62 percent, in New York and California, particularly.

According to CNBC, top earners in California “could face a state and federal tax rate of as much as 62.6% under the Biden plan, according to calculations from Jared Walczak of the Tax Foundation.”

The Power producer and actor is not the only Hollywood figure to publicly complain about high taxes associated with Democrat leadership. Rapper Cardi B, whose estimated worth clocks in around $24 million, has marveled over how much she has paid in taxes publicly, telling her followers in a 2018 Instagram video that “the government is taking 40 percent of my taxes” and demanding Uncle Sam to tell her where her “fucking tax money” is going.

Cardi B is sounding awfully fiscally conservative in this video….! I’m all about it. https://t.co/LNrO2lVrLN

Despite that, she came out as a strong support for Democrat socialist Sen. Bernie Sanders (I-VT) and stated that she did not mind being taxed at an excessive rate if her earnings went toward massive government programs, such as offering free college and free health care to all.

In an August discussion with the “WAP” singer, Biden committed to hiking tax rates to pay for the radical left’s grandiose, multitrillion-dollar policy proposals.

“I have a whole list of things that I want our next president to do for us,” the 28-year-old rapper said. “What I want is free Medicare. It’s important to have free [healthcare] because look what is happening right now. Of course, I think we need free college.”

“There’s no reason why we can’t have all of that. Presidents have to take responsibility,” Biden said, adding that “the way we can pay for all of this is doing practical things, like making sure that everybody has to pay their fair share.”