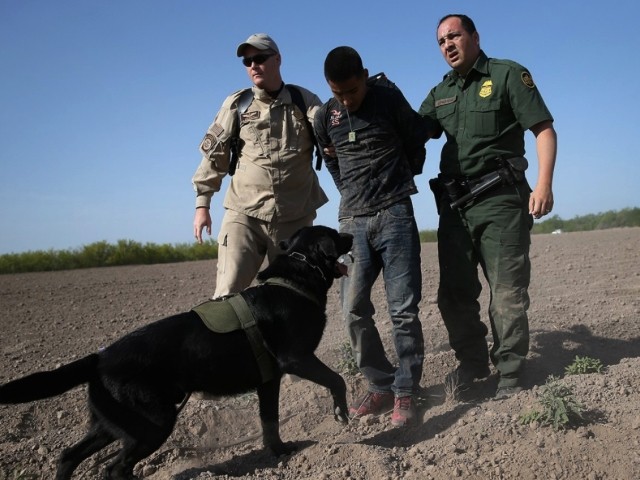 Violence by migrants against Border Patrol agents appears to be escalating this week when a previously deported illegal immigrant from Mexico pulled a handgun on an agent in California. In Arizona, two Guatemalan nationals attacked Border Patrol agents in separate incidents.

U.S. Border Patrol agents patrolling the border in Southern California received a report that electronic surveillance picked up two illegal immigrants crossing the border on foot on November 26. The agents responded to the scene located about a half-mile north of the Otay Mesa Port of Entry and encountered the two migrants.

One of the migrants surrendered without incident. The second man, later identified as Hector Rodriguez-Chavez, pulled a loaded Star Echeverria pistol and pointed it at one of the agents, according to information obtained from the U.S. Attorney for the Southern District of California’s office. The agent began struggling with the illegal immigrant and placed his body on the right arm of the subject. He could not pull the pistol from Rodriguez’s hands. Two other agents joined in the struggle about a minute later to attempt to subdue the migrant and gain control of the firearm. After multiple verbal commands to drop the pistol and stop resisting, one of the agents used a taser on the subject who then dropped the pistol and surrendered the criminal complaint states.

A background investigation identified the suspect as Hector Rodriguez-Chavez. The Mexican national has a lengthy history of violent drug crimes and firearms offenses, the U.S. attorney’s office stated. His records indicate that immigration officers deported him at least five times over a 20-year period.

In the first incident, Border Patrol agents working south of Three Points, Arizona, attempted to arrest four migrants who illegally crossed the border from Mexico. A 25-year-old Guatemalan man allegedly became combative and threw dirt in the agent’s face, according to information obtained from Tucson Sector Border Patrol officials. He then reportedly began swinging his belt at the agent in an apparent attempt to use the attached belt buckle as a weapon. Following a struggle, agents subdued the man and placed him in handcuffs. The assaults continued as the Guatemalan man allegedly spit in the face of another agent.

Agents patrolling west of Three Points later that evening came under assault again after a Border Patrol K-9 tracked an illegal immigrant in the desert after he crossed the border from Mexico. After finding the man, a fight broke out. The agent eventually subdued the man and place him under arrest.

Officials identified the man as a 36-year-old Guatemalan national who had been deported in May 2018 to his home country for immigration violations.

One of the agents was transported to a hospital for evaluation. He was released after examination.