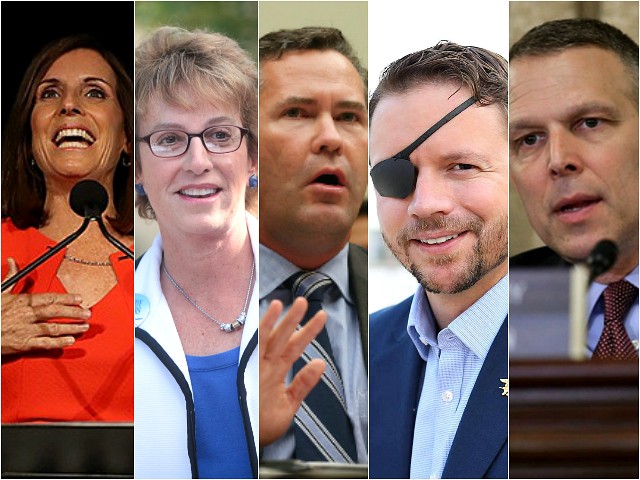 There are 172 military veterans running for office in this midterm election from both parties — a total of 109 Republicans, 62 Democrats, and one independent, with 67 of them incumbents, according to the Military Times.

Here are five of the top Republican veterans we are watching:

McSally was the first American female to fly in combat, after the lifting of the U.S. military’s ban on females flying in combat. She was also the first female commander of an Air Force fighter squadron. She was an A-10 pilot, the aircraft popular among troops for its support of ground troops in combat.

McSally flew combat patrols over Iraq, to enforce the U.S. no-fly-zone, and over Afghanistan, dispatching weapons from her A-10 for the first time in combat.

McSally also sued the Pentagon and got it to change its policy requiring American servicewomen stationed in Saudi Arabia to wear an abaya, or full-length cover, when traveling off base.

McSally is the first female Republican representative from Arizona. She also has pipes, recently singing the national anthem at an Arizona State University football game:

Thrilled and honored to be able to sing the National Anthem before ⁦@ASU⁩’s homecoming game. Congrats on the win! pic.twitter.com/O5iD8qS27b

Wendy Rogers, 64, is a retired Air Force lieutenant colonel running for the U.S. House of Representatives in Arizona’s 1st Congressional District. Rogers became one of the first 100 female pilots in the U.S. Air Force in 1981. She flew humanitarian missions all over the world and then became a flight instructor at the Air Force Academy.

During the fall of the Berlin Wall, she ran the Bosnian Airlift, which brought in food, medicine, and other supplies into Sarajevo and besieged areas inaccessible by land.

After retiring, Rogers and her husband, also a retired Air Force officer, started a home inspection business. The Rogers have two children, one of them a Marine officer. They have four grandchildren.

Rogers is the development director of an Arizona charter school, and a substitute teacher. She is also a foster parent. Both she and her husband are “active, alert-roster-ready officers” in the Civil Air Patrol.

Mike Waltz is a retired Army lieutenant colonel and Green Beret, who is running for the U.S. House of Representatives in Florida’s 6th Congressional District.

As part of the Army Special Forces, he has deployed all over the world and multiple times to Afghanistan, leading the search for Bowe Bergdahl. He has led calls for bringing him to justice after his return, for service members who were put in harm’s way while looking for him.

Waltz also served during the Bush administration in the Pentagon, as a defense policy director for Secretaries of Defense Donald Rumsfeld and Robert Gates. He then served in the White House as Vice President Dick Cheney’s counterterrorism adviser.

He also authored a book, Warrior Diplomat: A Green Beret’s Battles from Washington to Afghanistan, and serves as a senior fellow at the Foundation for Defense of Democracies.

He is a small business owner and Fox News Contributor. He was born and raised in Jacksonville, FL, raised by a single mother. His father and grandfather were Navy chiefs. He is raising a teenage daughter.

“One thing Veterans know – regardless of where you’re from or your economic status – is how to accomplish a mission for their country when called upon to do so. This is the warrior attitude I will bring to office.”

Dan Crenshaw is a retired Navy SEAL lieutenant commander running for the House of Representatives in Texas’s 2nd Congressional District.

Crenshaw is a 6th generation Texan who is fluent in Spanish. He joined the SEALs after graduating in 2006 from Tufts University, where he did Navy ROTC.

He served five deployments overseas, his first in Fallujah, Iraq. On his third deployment in 2012, he was hit by a roadside bomb during a mission in southern Afghanistan. His right eye was destroyed in the blast, and his left eye badly damaged. Completely blind, after several difficult surgeries, he regained sight in his left eye.

Crenshaw would go on to deploy two more times, one in the Middle East and then in South Korea. After he medically retired in 2016, he completed a Master’s degree at the Harvard Kennedy School of government.

Crenshaw fired back in a tweet, “Good rule in life: I try hard not to offend; I try harder not to be offended. That being said, I hope @nbcsnl recognizes that vets don’t deserve to see their wounds used as punchlines for bad jokes.”

Good rule in life: I try hard not to offend; I try harder not to be offended. That being said, I hope @nbcsnl recognizes that vets don’t deserve to see their wounds used as punchlines for bad jokes.

Growing up in Pennsylvania, Perry’s home often had no running water or electricity. He began working at age 13, first as a fruit picker, then a draftsman, dockworker, and insurance agent. He graduated from Pennsylvania State University and would later earn a Master’s degree from the United States Army War College.

He served in Operation Iraqi Freedom in 2009 through 2010 as the commander of the 2nd Battalion, 104th Aviation Regiment. He flew 44 missions and accrued nearly 200 combat flight hours.

He was promoted to brigadier general in November 2015 and assigned as assistant adjutant general for Army at the Pennsylvania National Guard’s Joint Force Headquarters in May 2016.