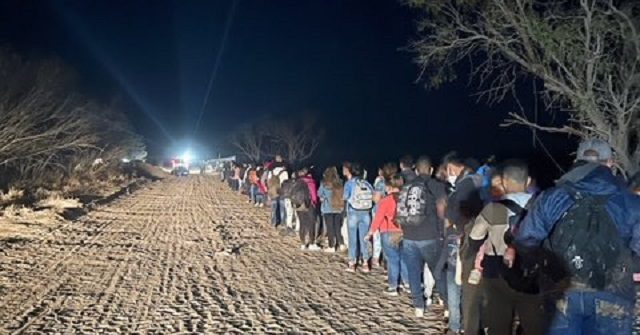 Agents in the Del Rio Sector apprehended more than 3,400 migrants who illegally crossed the border over the Super Bowl weekend, officials reported. These agents also interdicted 27 smuggling incidents and rescued at least 24 migrants, including a family of three drowning in the Rio Grande.

Del Rio Sector Chief Patrol Agent Jason D. Owens tweeted a report that his agents apprehended more than 3,400 migrants over the weekend where most Americans were preparing to watch Super Bowl LVI. In addition, he said his agents disrupted 27 smuggling attempts leading to the arrest of 142 people and prosecuted 24 rescue operations.

While most watched the Superbowl…
Another busy weekend for the Del Rio Sector, Friday – Sunday:
– Over 3,400 apprehensions
– 27 Smuggling cases totaling 142 arrests
– 24 Rescues pic.twitter.com/QVGIz93JCZ

The 24 rescues included a dramatic rescue captured on video where Eagle Pass Station agents risked their own lives to rescue a Haitian family of three. The video captures agents performing CPR on the father who had been submerged in the Rio Grande for several minutes. Their immediate response saved the lives of all three family members, Breitbart Texas reported.

A Border Patrol K-9 also acted to stop dangerous human smuggling tactics over the Super Bowl weekend, Chief Owens tweeted. A Uvalde Station K-9 alerted to the presence of 13 migrants who smugglers locked inside rail car haulers. The migrants had no means of escaping from the locked rail cars.

This weekend, a Uvalde Station K9 discovered 13 migrants locked inside car haulers on a train with no means to escape. Dangerous!
As usual, outstanding work by our Canine Teams! pic.twitter.com/8yx3Eq8eTp

In January, the Del Rio Sector became the busiest of the nine southwest Border Patrol sectors for the first time ever, Breitbart reported. The massive flow of migrants crossing the Rio Grande into the Del Rio Sector is shattering last year’s record pace, according to Chief Owens.