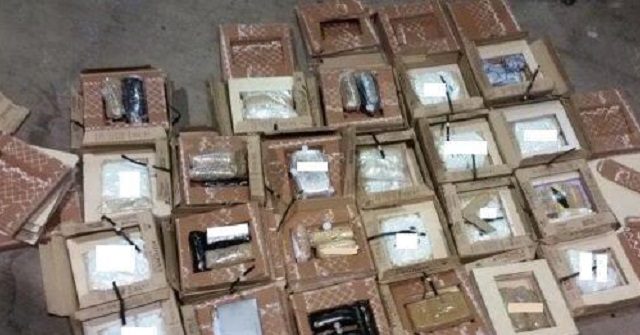 Tucson Sector Customs and Border Protection officers seized nearly 300,000 fentanyl pills, 25 pounds of heroin, and six pounds of cocaine at the Port of Nogales border crossing. The incident occurred as a U.S. citizen male allegedly attempted to smuggle the drugs into the country from Mexico.

CBP officers assigned to the Nogales Port of Entry on June 8 observed a pickup truck approaching from Mexico for entry into Arizona. The officers identified the driver as a U.S. citizen and referred him to the secondary inspection station, according to information obtained from Tucson Sector CBP officials.

The pickup truck contained a load of boxes of ceramic tiles, officials stated. During a physical inspection of the truck, officers noticed anomalies with the boxes of tiles. The officers opened the boxes and found they had been hollowed out and drugs were place in the gaps.

The search uncovered 46 drug packages hidden in the shipment of ceramic tiles. Those packages contained nearly 300,000 fentanyl pills (71 pounds), 25 pounds of heroin, and more than six pounds of cocaine, the report from CBP states.

The officers arrested the driver and seized the vehicle and drugs. They then turned the man and the drugs over to U.S. Immigration and Customs Enforcement’s Homeland Security Investigations for further investigation and preparation of  charges to be filed by the U.S. Attorney for the District of Arizona.

“This is a phenomenal seizure by our CBP Officers, who in the midst of the current pandemic, still remain focused and carry out the agency’s mission of protecting our frontlines,” Area Port Director Michael Humphries said in a written statement. “In this case, officers prevented nearly 300,000 fentanyl pills, one of the most abused and dangerous opioids from reaching communities throughout the United States.”

Officials placed the value of the drugs at more than $1 million.