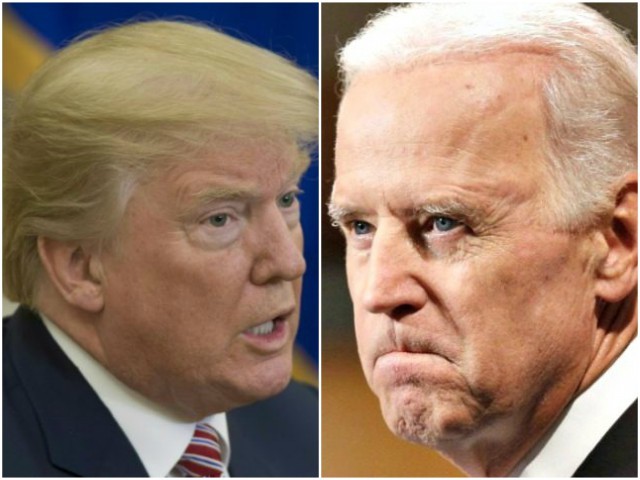 The poll also shows that if former Starbucks CEO Howard Schultz makes a run as an Independent, he is much more of a drain on the Democrat candidate than on Trump.

With Schultz in the race, Trump beats Harris by four points, 42 percent to 38 percent. Schultz earns 7 percent of the vote.

The poll did not look at head-to-head competitions between Trump and Sen. Elizabeth Warren (D-MA) or former Rep. Beto O’Rourke (D-TX), but with Schultz in the race, Trump beats Warren 42 percent to 39 percent; Schultz earns 8 percent.

The Republican Party overall polls better than Democrats, with 39 percent choosing the GOP to “lead the country forward,” against 37 percent who say the same about Democrats. Only 19 percent want a third option.

Those polled are almost evenly split on the issue of building a wall at the southern border. A plurality of 48 percent oppose the wall, while 46 percent want to see it built.

Medicare for all is a loser; a plurality of 42 percent oppose it, with only 36 percent supporting “replacing our current healthcare insurance system with Medicare for all.”

The good news for Democrats is that, at least according to this poll, in Biden they have a candidate who can beat Trump. The bad news is that Biden has already made two presidential runs and flamed out both times. Biden is a terrible presidential candidate, prone to gaffes, bizarre outbursts, and getting a little handsy with the ladies, including with children.

In this #MeToo era, there is no way Biden can run a national campaign without being haunted by these photos.

As a successful vice presidential candidate in 2008 and 2012, the spotlight was not on Biden, and then there is the age issue: the Serial Young Girl-Toucher turns 78 in 2020.

Biden is also up against the Democrat’s activist base, which is desperate to run a woman or minority (preferably both) and leave the era of white males in the past.

A concern for Trump is that his highest number of support in any of these polls is 45 percent. An incumbent should be polling, at the very least, in the high forties if he wants to feel good about re-election.

But Trump won the presidency in 2016 with just 46.1 percent of the national popular vote (to Hillary’s 48.1 percent), and as much as he might like to break 50 nationally, the president knows this is a state-by-state dogfight for electoral votes; he knows winning Pennsylvania is the key to a second term, not the popular vote.