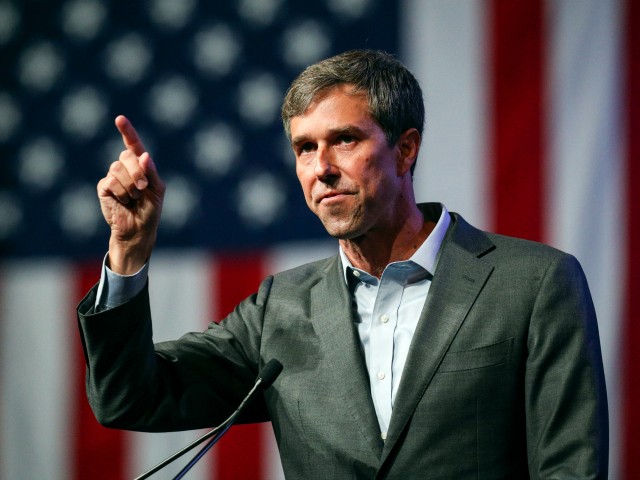 Rep. Robert Francis “Beto” O’Rourke (D-TX) has surged into the top tier of Democrat presidential candidates in 2020, per a new poll from Emerson College.

The poll of 800 registered voters, conducted December 6 to December 9, found that former Vice President Joe Biden leads the 2020 Democrat field with 26 percent while Vermont Sen. Bernie Sanders, an independent who caucuses with Democrats and ran for president as a Democrat in 2016, is in second place at 22 percent. Neither of those two results is surprising, but the real shock in this poll is who is next up: O’Rourke.

O’Rourke is the only other potential Democrat presidential candidate to break double digits and comes in third place in this survey with 15 percent. Sen. Kamala Harris (D-CA) is down in fourth place at 9 percent, and Sens. Elizabeth Warren (D-MA) and Sherrod Brown (D-OH) tie for fifth place with 7 percent apiece.

After O’Rourke’s impassioned run for the U.S. Senate in Texas in 2018’s midterm elections, where he came within three percent of defeating Sen. Ted Cruz (R-TX) in a deep red state, has sparked widespread interest in a potential run for the presidency from the up-and-coming darling of the left.

Recent reports suggest that top Democrat stars like former President Barack Obama and failed 2018 Florida gubernatorial candidate Andrew Gillum have been flirting with helping O’Rourke with a 2020 run for the presidency, too. NBC News reported this week:

Beto O’Rourke hasn’t made up his mind about a possible presidential run in 2020, but behind the scenes he’s speaking to potential kingmakers among a constituency whose support he’ll need in a Democratic primary: African-Americans.

In the last two weeks, the soon-to-be-former Texas congressmen met with former President Barack Obama at his Washington office, a source familiar with the meeting confirmed to NBC News, and spoke by phone with the Rev. Al Sharpton and fellow 2018 progressive darling Andrew Gillum.

While O’Rourke’s fortunes keep rising, other previously-thought-to-be-formidable potential 2020 Democrats have seen their chances slip out of grasp. Former Massachusetts Gov. Deval Patrick, a top Democrat who is close friends with Obama, announced he will not be running for the presidency. And Warren, his fellow Massachusetts Democrat, has been haunted by her history of falsely claiming to be a Native American–even establishment and usually sympathetic media outlets like the New York Times and Boston Globe have thrown cold water on a potential Warren White House bid:

Biden remains the clear favorite on the Democrat side, and the big question facing the former vice president who bowed out of a run in 2016 after his son passed away is if in his late 70s he will launch a White House bid that late in life. Biden is currently 76 years old, and if he were to win in 2020, he would be 78 years old when taking office in 2021. That would make him the oldest president ever upon taking office.

Similar age considerations afflict Sanders and if he would launch another bid for the White House. If he were to run, Sanders would be 79 years old on Election Day in 2020–again, if he were to win, making him the oldest person ever sworn into the presidency. But Sanders also faces intra-Democrat opposition, as the more establishment wing of his party is still aggrieved over his run against failed 2016 Democrat presidential nominee Hillary Rodham Clinton–believing Sanders weakened her walking into the general election, softening her up for current President Donald Trump to beat her.

The Emerson College survey’s margin of error is 3.6 percent.