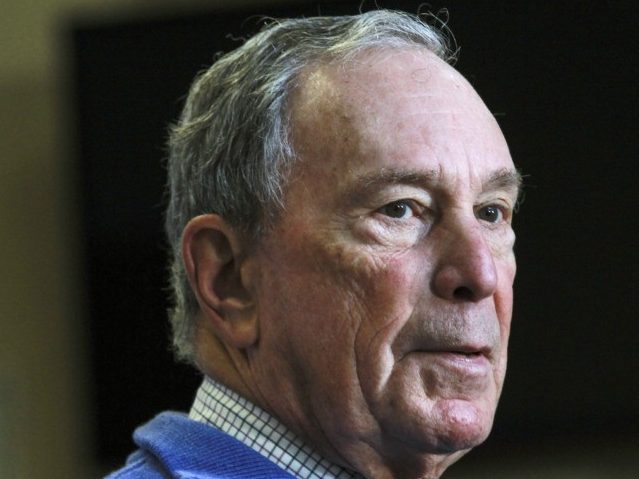 Former New York City mayor Michael Bloomberg is dropping an additional $5 million to air a new campaign advertisement touting Democrats and himself ahead of the midterm election. The ad has the establishment media, including the Washington Post, buzzing about a possible 2020 presidential run by the gun proponent.

Scheduled to air during Sunday’s broadcast of CBS’s 60 Minutes and on CNN and MSNBC this Monday, the two-minute ad prominently features Bloomberg, who begins by stating that while “has never been a particularly partisan person,” the time has come to vote out Republicans because they “have failed to lead.”

“I’ve never been a particularly partisan person. I’ve supported candidates from both sides. But at this moment, we must send a signal to Republicans in Washington that they have failed to lead, failed to find solutions and failed to bring us together,” the billionaire says while staring into the camera with an American flag in the background. “That’s why I’m voting Democratic.”

Released by the Bloomberg- funded Independence USA PAC, the clip alludes to the need for gun-control reform with a reference to the deadly Pittsburgh synagogue massacre, in which 11 Jewish worshipers were shot dead. Following national tragedies, voters look to Washington, D.C. to “offer solutions, to bring us together and to appeal to all of us Americans,” the ad says.

“We expect a plan. We expect to be called to a higher purpose, we expect to work together. I don’t hear that call coming from Washington these days. Do you? In fact, I hear the opposite,” says Bloomberg as a photo of President Donald Trump appears.

In a statement released Sunday evening, Bloomberg said of the ad, “The country is deeply divided. The president and Republicans are fueling that division, and that holds us back as a nation. I’m unwilling to sit by and accept it.”

Bloomberg has spent $30 million on Television ads alone for Democrats running in the midterm election. As Breitbart News’ AWR Hawkins wrote last month, “Bloomberg’s overall commitment is to spend $100 million this election cycle to see gun controllers take control of the House. On October 10, 2018, Breitbart News reported that Bloomberg is only one of many liberal billionaires trying to spend enough to flip the House.”

“Just think the three individuals who are funding the Democratic Party, George Soros, you’ve got Michael Bloomberg, it’s not just $80 million into the House, he put another $20 million to try to win the Senate, then Tom Steyer, more than a $120 million he’s spent trying to win,” McCarthy told Bartiromo. “His win goal is to try to impeach President Trump. He brags that his impeachment list is bigger than the NRA list. Those three individuals are trying to buy our government in this process. It’s very disturbing.”