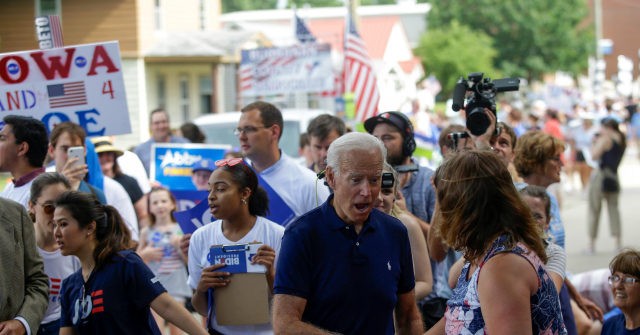 Most Democrat 2020 presidential hopefuls who chose to participate in Independence Day events Thursday chose to do so in Iowa, the first in the nation primary contest. Several others took to early primary state New Hampshire.

Former Vice President Joe Biden is marching in the annual Independence Day parade in Independence, Iowa, in the morning, followed in the evening by a community event with his wife, Jill, in Marshalltown, Iowa.

Sen. Bernie Sanders is scheduled to hit Iowa for parades the morning of the 4th as well, but in Slater and Ames for their respective Independence Day parades. At noon, Sanders will join in an Ames ice cream social. As the day rolls on, Sander will hit two more parades in Windsor Heights and Pella.

Sen. Kamala Harris will spend her Independence Day at an afternoon meet and greet in Indianola before continuing on to a barbecue in Council Bluffs, Iowa.

Sen. Elizabeth Warren did not appear to have any personal appearances scheduled on the 4th of July on her Facebook events and website events pages. Her campaign website listed a host of “team Warren” and volunteer organized events but none that appeared to designate the candidate actually making an appearance.

Robert “Beto” O’Rourke will march with wife Amy in the morning’s annual Independence Day parade in Independence, Iowa. They will spend the afternoon at a house party in Williams, Iowa. The pair spent time the two days prior to Independence day at house parties in other Iowa cities: Ames and St. Ansgar.

South Bend, Indiana, Mayor Pete Buttigieg is holding a morning meet and greet event in Storm Lake, Iowa. Supporters are marching in several parades. It was not clear from his campaign website if the candidate himself would march in any parades. Buttigieg did, however, decry President Donald Trump’s Independence Day celebration in Washington, DC.

Sen. Kirsten Gillibrand’s Facebook page listed no events for the 4th. The only upcoming event listed was a Democracy Town Hall set for July 7.

Sen. Cory Booker spent Wednesday evening before the 4th campaigning in Mexico and Nevada. Booker spent the day before America’s Independence Day crossing into Mexico to escort foreign nationals across the U.S. southern border. On Thursday, he tweeted out photos of serving pancakes but did not specify where he was dishing them out or his side of “best jokes.” It was not clear if he participated in any official Independence Day events.

Former Secretary of Housing and Urban Development Julián Castro found time hours before Independence Day to slam the Betsy Ross flag in the midst of the Nike controversy. He also denounced President Trump’s 4th of July celebration in Washington, DC. Castro’s campaign website did not appear to list any 4th of July events.

Former Gov. John Hickenlooper had no events scheduled for Independence Day, according to his Facebook page. His next upcoming event is listed as Iowa meet and greets on July 7 and 8 in Perry, Creston, Ottumwa, and Des Moines.

Sen. Amy Klobuchar of Minnesota posted video of her holding campaign signs with a team in New Hampshire. Her Facebook page listed two events on the 4th. Both were marches with the candidate, one in Merrimack and another in Amherst.

Rep. Tulsi Gabbard of Hawaii is also spending her Independence Day in New Hampshire. Her Facebook page lists her participating in three Independence Day parades, one each in Amherst, Merrimack, and Laconia.

Former Maryland Rep. John Delaney also spent his 4th of July in New Hampshire. His schedule included two barbecues, one in Brentwood and another in Manchester.

Rep. Eric Swalwell’s Facebook page did not list any 4th of July events. His next event listed is a fundraiser on July 13.

Former tech executive Andrew Yang did not have any 4th of July events scheduled on his campaign Facebook page. His next event is part of his Humanity First tour, taking place on July 13 in Portland, Oregon. A Yang event on July 10 states it will not host the candidate, just a surrogate.

Activist Marianne Williamson is spending the 4th giving a speech at a Concord, New Hampshire, reception.

Sen. Michael Bennet’s Facebook page listed no events on Independence Day or any future dates as of Thursday.