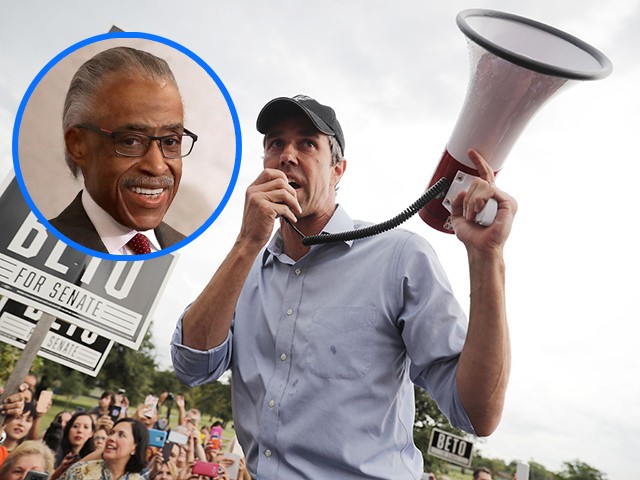 Rep. Robert Francis “Beto” O’Rourke (D-TX) reportedly chatted with left-wing civil rights activist Al Sharpton on Friday and plan to meet in the near future as the progressive lawmaker considers launching a presidential bid in 2020.

Sharpton spokeswoman Rachel Noerdlinger confirmed to BuzzFeed News that the pair shared a “great conservation” and plan to meet “within the next couple of weeks.”

Sharpton is no stranger to the upper echelons of Democrat Party politics, having run for president in 2004 and later advised for then-President Barack Obama. Sharpton recently raised eyebrows after tax filings of his not-for-profit organization National Action Network show the Baptist minister sold the rights to his life for a 10-year period in a deal worth $531,000.

Sharpton is among the latest high-profile political figures to connect with O’Rourke, who handily lost his bid for the U.S. Senate in Texas against Republican rival Sen. Ted Cruz (R-TX) in the 2018 midterm election.

Earlier November, The Washington Post reported O’Rourke met with former President Barack Obama in Washington, D.C. — however — press representatives for both camps have refused to comment on what was discussed during the sit-down. Some of former President Obama’s most prominent financial backers, including Chicago investment banking executive Louis Susman have already thrown their support behind O’Rourke, among the clearest signs yet that big money donors are unwilling to support an aging roster of 2020 Democrat Party candidates, including  76-year-old former vice president Joe Biden and 77-year-old Sen. Bernie Sanders (I-VT).

“It’s time to pass the torch to a new generation,” Susman said in an interview CNN last week. “I have nothing against the Bidens and Kerrys of the world and all of these senators that are looking at it, but I think the Beto example is what inspired people and what we are going to need.”

Susman’s comments come as members of O’Rourke’s inner circle reportedly hold talks with top political operatives who worked on Obama’s campaign in New Hampshire and Iowa. David Wysong, O’Rourke’s chief of staff, is spearheading the discussions with the operatives, according to CNBC. “This is the phase for someone exploring a presidential campaign in that they’re doing everything they can to decide who they may want to run an organization and who they could turn to if he enters the race,” one Obama aide told the business news outlet.