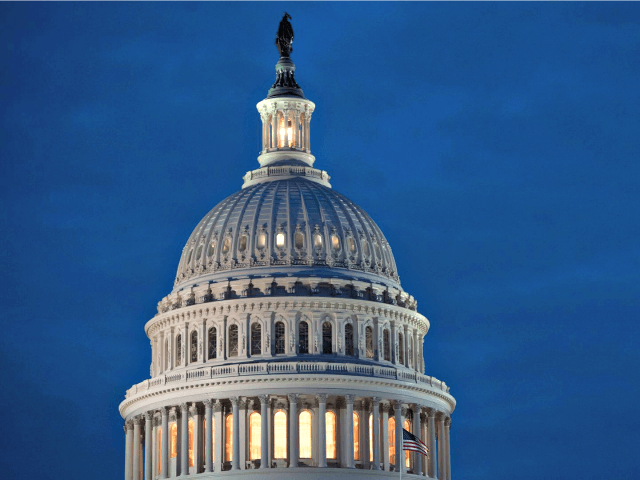 Twenty key races are expected to determine which party controls the House of Representatives after voters go to the polls on November 6.

The generic ballot advantage of Democrats in Congressional races in the midterm elections holds steady at around 7.6 percent, which is slightly above the five percent generic ballot advantage most political experts believe Democrats have needed to win a majority in the House since the gerrymandering of congressional district boundaries by Republican controlled state legislatures after the 2010 census.

Breitbart News has a smaller list of toss-up races than the Cook Political Report, which currently lists 31 toss up races, 30 held by Republicans, and only one held by a Democrat.

As things stand 18 days before the election, 209 seats are likely Democrat, while 206 are likely Republican. In order to maintain a majority in the House of Representatives, Republicans must win 12 of these 20 key races that are the remaining toss-ups.

Here is a brief analysis of each these 20 toss-up races, organized by state:

NY-19: Incumbent Rep. John Faso (R-NY-19) is in a dead heat with Democratic challenger Antonio Delgado in a district with a Cook Partisan Voting Index of Republican +2, according to a Monmouth University Poll conducted in September. Delgado lead by two points in that poll, 45 percent to 43 percent, which was within the margin of error.

NY-22: Incumbent Rep. Claudia Tenney (R-NY-22) holds an eight point lead over Democratic nominee Anthony Brindisi in a district with a Cook Partisan Voting Index of Republican +6, according to the most recent poll.

Other polls show the conservative firebrand is in a dead heat with her Democratic challenger.

On Tuesday, Speaker of the House Paul Ryan campaigned in the upstate New York district with Tenney.

“The indicted incumbent, who only recently reignited his campaign after initially suspending it, ekes out a small advantage over his challenger,” Siena College pollster Steven Greenberg said when the poll was released earlier this week.

Greenberg noted that the “district that has more than 40,000 more Republicans than Democrats. A district that favors Republicans maintaining control of the House by 18 points. And a district that gives President Trump an 18-point net positive job approval rating.”

MN-01: In this open seat currently held by Rep. Tim Walz (D-MN-01), the Democratic nominee for governor, Republican Jim Hagedorn holds a narrow lead over Dan Feehan. That’s a drop for Hagerdon, who was up 14 points in a September poll conducted by Harper Polling, 47 percent to 33 percent.

This is Hagerdon’s fourth try at winning the seat, which Walz narrowly won in 2016. President Trump won the district by 15 points over Hillary Clinton in 2016.

President Trump held a rally earlier this month in Rochester, Minnesota, in the center of the district, to support Hagerdon.

MN-03: Incumbent Erik Paulsen (R-MN-03) has been hard pressed by Democratic challenger Dean Phillips, but appears to be gathering momentum for a potential come-from-behind win. The most recent KTSP/Survey USA Poll shows that Paulsen has closed the gap with Phillips to just five points, 49 percent to 44 percent.

Rising Democrat incivility has played a role in this race.

“Congressman Erik Paulsen says he’s troubled by a rise in the vitriol as he campaigns for another term,” WCCO radio reported earlier this month:

The 3rd District Republican says it crossed the line last week when he received a threatening phone call at his home.

“A phone call came in to my house, and my wife got the call. It was someone who made a threat. I won’t get into the particular threat, but it was a pretty dramatic and aggressive threat.”

In an internal GOP poll released earlier this week, Walters holds a narrow lead, within the poll’s margin of error.

CA-48: Incumbent Rep. Dana Rohrabacher (R-CA-48), the former Reagan speechwriter, surfer, and champion of legalizing medical marijuana, is in a nip and tuck race with his Democratic challenger Harley Rouda in a district that has been solid Republican for years, but has been steadily moving to the left. In 2016, Hillary Clinton carried the district by two points.

In the most recent poll, Rohrabacher and Rouda are tied, 48 percent to 48 percent.

FL-26: Incumbent Rep. Carlos Curbelo (R-FL-26) faces the toughest political fight of his career from Democrat nominee Debbie Mucarsel-Powell in this district with a Cook Partisan Voting index of Democrats +6.

Curbelo leads by one point, within the margin of error, in the most recent poll by Mason-Dixon Strategies and Telemundo 51.

“Curbelo once had a lead in the race but Mucarsel-Powell has closed the gap in recent weeks through increased TV spending. Curbelo is better known than Mucarsel-Powell according to the poll and has a higher favorability rating, though Mucarsel-Powell has a lower unfavorable rating than Curbelo,” the Miami-Herald reported on Monday.

FL-27: When Rep. Iliana Ros-Lehtinen (R-FL-27) announced her plans to retire from this seat, political pundits around the country thought this seat would be a slam dunk win for the Democrat nominee, 77-year-old former Clinton administration Secretary of Health and Human Services and former Clinton Foundation President Donna Shalala. President Trump lost the district by nearly 20 points in 2016, but Shalala does not speak Spanish in a district that is 56 percent Latino, and she has been out-campaigned by the Republican candidate, former Telemundo broadcast Maria Elena Salazar, who is bilingual and more modern communications savvy. The latest poll shows Salazar leading the former “sure bet” Shalala by two points.

OH-01: Incumbent Steve Chabot (R-OH-01) was considered an easy target by Democrats when they selected Aftab Pureval, the suave Hamilton County Clerk of Courts with the movie star good lucks as their nominee. But Pureval has stumbled on the campaign trail with an election finance scandal in which he has yet to offer a persuasive response. The latest polls give Chabot a single digit lead, but Democrats around the country are pouring money in to help push Pureval across the finish line.

OH-12: Incumbent Rep Troy Balderson (R-OH-12) narrowly defeated his general election challenger, Democrat Danny O’Connor, in an August special election in this district that has a Cook Partisan Voting Index of Republicans +7. Though Balderson has shied away from fully embracing the Trump agenda, even though the president’s rally in the district days before the August special election helped him get the win, O’Connor has had a difficult time generating the momentum in the November election that almost carried him to victory in August.

PA-01: Incumbent Rep. Brian Fitzpatrick (R-PA-08) clings to a narrow lead in this district heavily gerrymandered away from Republicans after the Democrat-controlled Pennsylvania Supreme Court stepped in earlier this year to order the redrawing of Congressional District boundaries in an unprecedented move.

Fitzpatrick holds a four point lead over his Democrat challenger Scott Wallace, a multi-millionaire and grandson of former Vice President Henry Wallace, who was dumped from the 1944 ticket by President Franklin D. Roosevelt in favor of Sen. Harry Truman (D-MO) because his views were considered to left wing.

The latest polls show that he is in a tie with Democrat challenger George Scott.

Two long term Republican Congressmen in Texas find themselves in the political fights of their lives.

TX-07: Incumbent Rep. John Culberson (R-TX-07), with a long history of a conservative voting record, is vulnerable in this midterm election, due to changing demographics of the Houston area district he represents. Though it retains a Cook Partisan Voter Index of Republicans +7, the district has been shifting steadily to the left. In 2016, the district voted narrowly for Hillary Clinton over Donald Trump.

TX-32: Incumbent Rep. Pete Sessions (R-TX-32) faces a challenge in his Dallas area district similar to the one Culberson faces in Houston.

Sessions leads his Democrat challenger, attorney Collin Allred, by one point, within the margin of error, in the most recent New York Times Upshot/Siena Poll.

KY-06: Long considered a safe Republican seat, Kentucky’s 6th Congressional District, which Rep. Andy Barr (R-KY-06) has represented in Congress since 2013, is in play this election cycle. President Trump considers Barr’s race of such importance he held a rally there in Richmond last weekend.

NC-09: Dr. Mark Harris upset incumbent Rep. Robert Pittenger (R-NC-09) in the Republican primary back in May, and Democratic challenger Dan McCready is pressing him hard in this Charlotte area district that leans slightly Republican.

Lance may be helped with some coattails from GOP Senate nominee Bob Hugin, who is mounting a strong challenge to embattled incumbent Sen. Robert Menendez (D-NJ).

Lance leads Malinowski by one point, within the margin of error, in the most recent New York Times Upshot/Siena College Poll.

VA-07: Incumbent Rep. David Brat (R-VA-07), the former college professor of economics who shocked the political world with his 2014 primary upset victory over then Republican House Majority Leader Eric Cantor, faces a hard challenge from far left Democratic challenger Abigail Spanberger, a controversial former CIA official, in a district whose boundaries are now slightly more favorable to Democrats than in the 2014 and 2016 general elections.

Fivethirtyeight.com currently gives Democrats a five in six chance of winning the majority in the House of Representatives on November 6, while giving Republicans only a one in six chance.

The Breitbart News best guess estimate 18 days before the election is that there are a range of outcomes in which either party ends up with a majority in the House.

In the best outcome for the Republicans, they win 14 of these remaining 20 toss-up races, and emerge with a narrow five vote margin over the Democrats when the 116th Congress convenes in January, 220 Republicans to 215 Democrats.

In the best outcome for the Democrats, they run the table in these 20 “toss-up” races and end up with a 23 vote majority in the 116th Congress, 229 Democrats to 206 Republicans.