The father of 14-year-old Ava Majury shot and killed an alleged stalker after he showed up at the Majury home with a shotgun, allegedly shooting one round through the door of the house.

The incident occurred on July 10, 2020, but the New York Times highlighted it on February 17, 2022, because Ava just had to pull out of school in order to avoid an individual she feared may be planning a copy cat attack.

In the early part of 2020 Ava noticed that one of her TikTok followers, EricJustin111, was also messaging her on Instagram and Snapchat. The fan turned out to be 18-year-old Eric Rohan Justin, of Maryland.

Justin allegedly went from being a fan to being a stalker, eventually asking “one of Ava’s male classmates whether he had access to a ‘strap,’ or gun, shared plans to assault her, and wrote, ‘I could just breach the door with a shotgun i think.’” 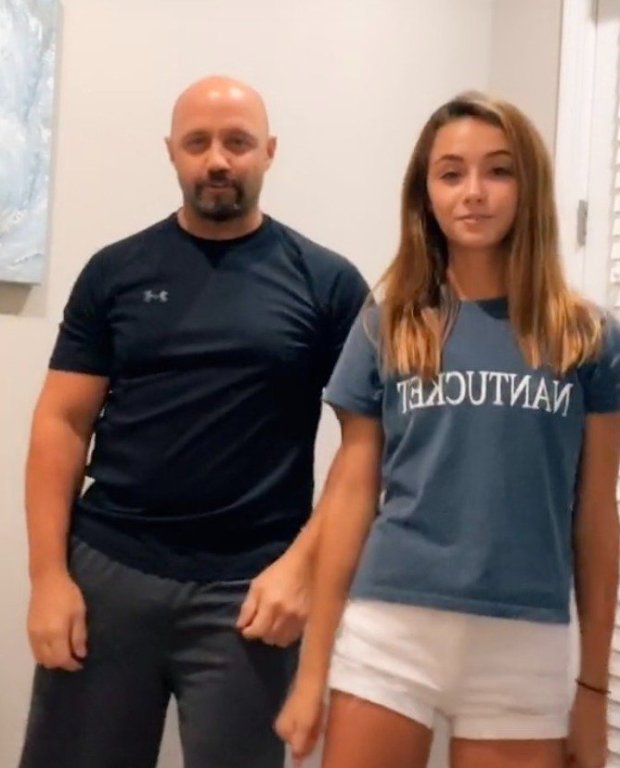 Ava Majury, 14, stands with father Rob, 51, for one of the teen’s TikToks (Image Credit: TikTok)

On July 10, 2020, Justin allegedly showed up at the Majury family home with a shotgun, where he pulled the trigger and “blew open the front door.” His firearm jammed after the initial shot and Ava’s father, an ex-Jersey City policeman, retrieved a handgun and ran toward the front door.

Justin fled the scene only to return a short time later, at which time Ava’s dad shot him. The Naples Daily News reported Justin’s death by noting, “A man was shot and killed while attempting a home invasion Saturday morning in a North Naples gated community.”

The NYT report sets the incident in a broader context and notes that “a boy” who had been allegedly also received Justin’s messages about attacking Ava was recently following her around school. The boy had allegedly also made videos of himself shooting guns at a gun range. As a result, Ava withdrew from school and is now attending via virtual classroom.