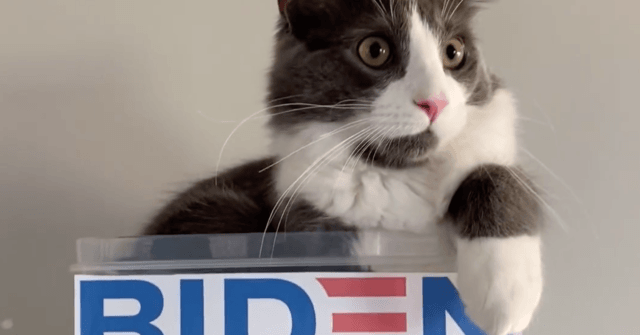 Joe Biden’s presidential campaign is posting cat videos on social media, as the candidate has “called a lid” and retired to his basement for several days to prepare for the final presidential debate on Thursday.

A Facebook post, shared by the campaign on Tuesday, shows cats playing with masks, campaign paraphernalia, and office equipment.

An accompanying message reads: “A purr-fect reminder for you to vote, volunteer, donate, or support in whatever way you can. Thank you to all the people who shared photos and videos of their cats with us!”

A caption reads: “Don’t let the Democats [sic] down!”

The Biden campaign continues to dodge questions about Hunter Biden’s emails. The former vice president’s son is alleged to have arranged meetings with his father for his foreign business partners — including executives from China and from the corrupt Ukrainian energy company, Burisma.

The Biden campaign has not disputed the authenticity of the emails and it has not denied the allegations, except to say that an alleged meeting with a Burisma adviser had not been found on the former vice president’s official schedule.

Biden has also evaded questions about whether he would pack the Supreme Court — i.e. expand the number of seats and fill the new positions with liberal justices.

In an ABC News town hall last week, he promised he would provide an answer before Election Day.