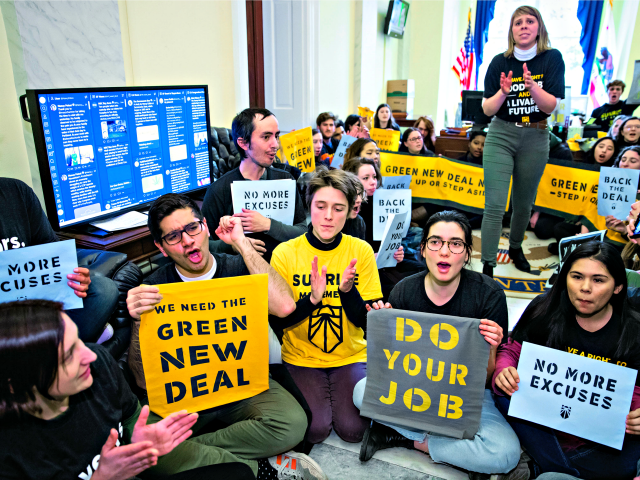 An estimated 800 student demonstrators packed into the offices of lawmakers and lined the hallways of Capitol Hill on Monday, which led to the arrests of 138 people, according to U.S. Capitol Police.

Before arrests were made, middle school and high school students of various ages took root in Pelosi’s office and the surrounding halls.

.@sunrisemvmt says more than 800 protestors are here lining Congressional office buildings to protest need for a #greennewdeal. This is a group outside Pelosi’s office. Similar groups are taking over space at @WhipHoyer & @RepMcGovern pic.twitter.com/i5c1bzfu3G

The students could be seen holding signs that read “do your job” and “back the deal.” Other signs said, “What’s your plan?” and “We need the Green New Deal.”

After the students refused to obey Capitol police and leave the area, authorities began to make arrests.

The demonstrators could be heard chanting as the police forced them out of the building.

Back in Pelosi’s office, police are beginning to remove protestors. pic.twitter.com/JudVCAhxe1

Before being forced out, one demonstrator loudly said, “Democrats hear us right now, hear us!”

Pelosi does not use her office in the Cannon House Office Building, which is where many of the protesters gathered. Her central leadership office is located in the main Capitol building, to which the protesters do not have access.

Capitol Police said the demonstrators were arrested after “unlawfully demonstrating in the Cannon and Longworth House Office Buildings.”