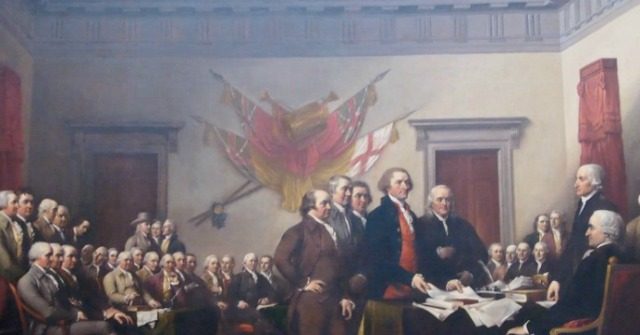 It is increasingly popular to question America’s greatness and status as a “Shining City on a Hill,” but the Founding Fathers showed that patriotism is not a bad thing, and U.S. freedom should never be taken for granted.

Honor the risk the nation’s earliest patriots took and celebrate Independence Day by remembering some of the most patriotic quotes from America’s Founding Fathers. Emphasis added:

In offering to you, my countrymen, these counsels of an old and affectionate friend, I dare not hope they will make the strong and lasting impression I could wish; that they will control the usual current of the passions, or prevent our nation from running the course which has hitherto marked the destiny of nations. But, if I may even flatter myself that they may be productive of some partial benefit, some occasional good; that they may now and then recur to moderate the fury of party spirit, to warn against the mischiefs of foreign intrigue, to guard against the impostures of pretended patriotism; this hope will be a full recompense for the solicitude for your welfare, by which they have been dictated.

2. Alexander Hamilton, Speech on the Compromises of the Constitution 1788:

Yet, however weak our country may be, I hope we shall never sacrifice our liberties. If, therefore, on a full and candid discussion, the proposed system shall appear to have that tendency, for God’s sake, let us reject it! But, let us not mistake words for things, nor accept doubtful surmises as the evidence of truth. Let us consider the Constitution calmly and dispassionately, and attend to those things only which merit consideration.

But a Constitution of Government once changed from Freedom, can never be restored. Liberty once lost is lost forever. When the People once surrender their share in the Legislature, and their Right of defending the Limitations upon the Government, and of resisting every Encroachment upon them, they can never regain it.

“Guard with jealous attention the public liberty. Suspect everyone who approaches that jewel. Unfortunately, nothing will preserve it but downright force. Whenever you give up that force, you are inevitably ruined.”

“But where, says some, is the King of America? I’ll tell you. Friend, he reigns above, and doth not make havoc of mankind like the Royal Brute of Britain.”

For if Men are to be precluded from offering their Sentiments on a matter, which may involve the most serious and alarming consequences, that can invite the consideration of Mankind, reason is of no use to us; the freedom of Speech may be taken away, and, dumb and silent we may be led, like sheep, to the Slaughter.

You have now in the field armies sufficient to repel the whole force of your enemies and their base and mercenary auxiliaries. The hearts of your soldiers beat high with the spirit of freedom; they are animated with the justice of their cause, and while they grasp their swords can look up to Heaven for assistance. Your adversaries are composed of wretches who laugh at the rights of humanity, who turn religion into derision, and would, for higher wages, direct their swords against their leaders or their country. Go on, then, in your generous enterprise with gratitude to Heaven for past success, and confidence of it in the future. For my own part, I ask no greater blessing than to share with you the common danger and common glory. If I have a wish dearer to my soul than that my ashes may be mingled with those of a Warren and Montgomery, it is that these American States may never cease to be free and independent.

“What country can preserve its liberties if their rulers are not warned from time to time that their people preserve the spirit of resistance. Let them take arms.”

Besides the advantage of being armed, which the Americans possess over the people of almost every other nation, the existence of subordinate governments, to which the people are attached, and by which the militia officers are appointed, forms a barrier against the enterprises of ambition, more insurmountable than any which a simple government of any form can admit of. Notwithstanding the military establishments in the several kingdoms of Europe, which are carried as far as the public resources will bear, the governments are afraid to trust the people with arms.

The sacred rights of mankind are not to be rummaged for, among old parchments, or musty records. They are written, as with a sun beam, in the whole volume of human nature, by the hand of the divinity itself; and can never be erased or obscured by mortal power.

“Is life so dear, or peace so sweet, as to be purchased at the price of chains and slavery? Forbid it, Almighty God! I know not what course others may take, but as for me, give me liberty or give me death!”

If ye love wealth better than liberty, the tranquillity of servitude than the animating contest of freedom—go from us in peace. We ask not your counsels or arms. Crouch down and lick the hands which feed you. May your chains sit lightly upon you, and may posterity forget that ye were our countrymen!

“He that would make his own liberty secure, must guard even his enemy from oppression; for if he violates this duty, he establishes a precedent that will reach to himself.”