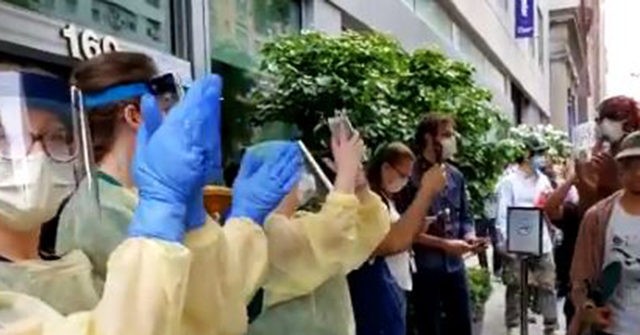 More than 1,200 health professionals have signed a letter saying that they approve of protests against racism during the Chinese virus pandemic, because it is “vital to the national public health.” The health professionals added, however, that protesting lockdown orders is still dangerous, and is also “rooted in white nationalism.” According to the letter, “White supremacy is a lethal public health issue that predates and contributes to COVID-19.”

A group of healthcare and medical professionals wrote an open letter expressing their support for protests against racism in the wake of the death of George Floyd — despite the pandemic that so many health officials have been warning the public about — adding that such protests against racism should not be shut down due to coronavirus fears, reports CNN.

“As public health advocates, we do not condemn these gatherings as risky for COVID-19 transmission,” wrote the health professionals in their letter. “We support them as vital to the national public health and to the threatened health specifically of Black people in the United States.”

“We can show that support by facilitating safest protesting practices without detracting from demonstrators’ ability to gather and demand change,” they continue.

“This should not be confused with a permissive stance on all gatherings, particularly protests against stay-home orders,” state the health professionals, who go on to bizarrely claim that such protests are also “rooted in white nationalism.”

“Those actions not only oppose public health interventions, but are also rooted in white nationalism and run contrary to respect for Black lives,” reads the letter.

“White supremacy is a lethal public health issue that predates and contributes to COVID-19,” affirm the health professionals in their letter.

“We created this letter in response to emerging narratives that seemed to malign demonstrations as risky for the public health because of Covid-19,” explain the authors — most of whom are from the University of Washington’s Division of Allergy and Infectious Diseases.

The letter was also signed by over 1,200 other health professionals who claim that they concur with the sentiments.

The health professionals go on to advise that protesters engage in “social distancing” and “public masking” while they “call attention to the pervasive lethal force of white supremacy.”

The letter also mentions that while the health professionals are in support of such protests, people should nonetheless “prepare for an increased number of infections in the days following a protest.”