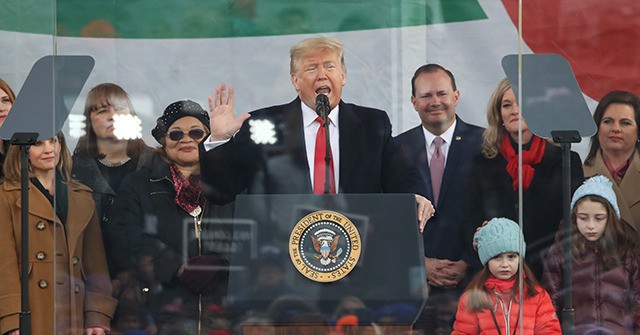 Following two terms of the presidency of Barack Obama, who is remembered as celebrating abortion giant Planned Parenthood with the words, “God bless you,” President Donald Trump and Vice President Mike Pence immediately went to work to fulfill the president’s promises to Americans who stand to protect the lives of the unborn.

Marjorie Dannenfelser, president of the Susan B. Anthony List (SBA List), who serves as national co-chair with Christina Bennett, of Pro-Life Voices for Trump, praised Trump’s leadership, and referred to his accomplishments as “groundbreaking.”

Below is a summary of 12 of Trump’s most significant achievements to officially turn the United States into a nation that values the sanctity of all human life, born and unborn.

Days after his inauguration, Trump reinstated the “Mexico City Policy,” one that prohibits any non-governmental organizations (NGOs) that receive U.S. aid from performing and promoting abortion overseas.

Beyond reinstating that policy, Trump expanded it to the new Protecting Life in Global Health Assistance program by directing the Secretary of State to ensure the ban on taxpayer funds for overseas abortions is in place across most U.S. global health programs that provide assistance.

In the final presidential debate of 2016, Trump stated, “I am pro-life, and I will be appointing pro-life judges.”

For decades the pro-abortion lobby has relied on the courts to advance their radical agenda. With Amy Coney Barrett confirmed, there will be 6 GOP-appointed justices on the Supreme Court, positioning us for a potentially dramatic change in abortion law in the U.S.

The Heritage Foundation reported that, as of October 21, Trump’s federal judiciary confirmations number 218.

As Breitbart News reported Tuesday, by the end of his first term, Trump will have confirmed more judges to the federal judiciary in one term than any recent U.S. president.

In April 2017, Trump signed a resolution overturning an Obama rule forcing states to grant Title X family planning funds to Planned Parenthood. Though Planned Parenthood and its allies have challenged this policy, Trump’s move marked a stark contrast to the Obama-era policies that overwhelmingly supported abortion on demand and referred to it as “women’s health care.”

Trump’s State Department has ended U.S. funding of UNFPA – an agency that human rights activists have linked to the support of population control programs such as China’s coercive abortion “one-child policy.”

The Trump Department of Health & Human Services (HHS) issued a rule in 2018 that required health insurers to specify whether its plans cover abortion. Affordable Care Act plans that provide coverage for elective abortions are required to collect a separate payment from enrollees for that coverage, as the Obamacare law required as well. The Obama administration, however, failed to enforce the law, permitting collection of abortion coverage premiums along with regular insurance premiums.

“Thanks to this trickery, millions of Americans have unwittingly purchased plans without knowing about the hidden abortion surcharge,” said Dannenfelser at the time the rule was finalized. “Consumers deserve to know how Obamacare pays for abortion so they can avoid having their hard-earned dollars used to fund the destruction of innocent lives.”

The Trump departments of HHS, Treasury, and Labor issued two interim final rules that provided protection from the HHS contraceptive mandate for both religious objectors, such as the Little Sisters of the Poor, and moral objectors, such as pro-life organizations. The new rule also exempted private employers and educational institutions that have sincerely held religious beliefs or moral objections against providing contraceptives or abortifacient drugs.

In January 2018, the Trump HHS established the Conscience and Religious Freedom division of the Office for Civil Rights, which works to protect health care providers who do not wish to participate in abortions from discrimination.

In February 2019, the Trump HHS released a rule that would block about $60 million in family planning funding to Planned Parenthood and other abortion providers who refer girls and women for abortions.

The regulation, which governs Title X, the federal grant program that provides funding for family planning services, prohibited the use of the funds to “perform, promote, refer for, or support abortion as a method of family planning.”

In June 2019, the Trump HHS announced it would no longer provide taxpayer funding for research in its programs that use human fetal tissue derived from the body parts of aborted babies.

In addition to ending research using fetal tissue from elective abortions at the National Institutes of Health (NIH), HHS also said the agency will be applying a rigorous review protocol as it considers funding for research outside of its department.

Nothing like a pro-abortion politician (@SenKamalaHarris) talking about “believing in science.” Perhaps start with believing in the science that human life begins at conception. #VPDebate #VPDebate2020 pic.twitter.com/rPIilUkf5C

In June, the Trump administration finalized a rule that reversed the Obama administration’s definition of sex discrimination by eliminating both “gender identity” and “termination of pregnancy,” or abortion.

The rule protects health care entities that receive federal funding from being required to participate in, or pay for, abortions.

In January, Trump became the first U.S. president to speak at the March for Life in Washington, DC, the largest pro-life event in the nation.

In September, Trump announced during the National Catholic Prayer Breakfast he would sign an executive order ensuring all babies born alive, whether prematurely or surviving abortion, receive the medical care they need.

Today I am announcing that I will be signing the Born-Alive executive order to ensure that all precious babies born alive, no matter their circumstances, receive the medical care that they deserve. This is our sacrosanct moral duty.

We are also increasing federal funding for the neonatal research to ensure that every child has the very best chance to thrive and to grow.

“I will always protect the vital role of religion and prayer in American society,” Trump said during his remarks at the prayer breakfast. “And I will always defend the sacred right to life.”

The SBA List continues to keep track of Trump’s pro-life wins. Meanwhile, the president pledged in early September that he will defund Planned Parenthood if elected to a second term.

Observing in a letter Joe Biden’s embrace of the Democrat Party’s extreme position of abortion on demand, at taxpayer expense, Trump wrote, if re-elected, he will also work to “continue the transformation of the federal judiciary,” and “finally pass and sign into law” pro-life legislation, including “the Pain-Capable Unborn Child Protection Act, the No Taxpayer Funding for Abortion Act, and the Born-Alive Abortion Survivors Protection Act.”

Dannenfelser said that, in just one term, Trump has become “the most pro-life president our nation has ever seen.”

“In 2016 then-candidate Donald Trump’s groundbreaking written commitments were instrumental to mobilizing pro-life voters to propel him to victory,” she said, adding, however, that “there is more work to be done.”

The pro-life leader said Trump’s letter offering his commitments for a second term is “further proof of pro-life momentum heading into this pivotal election.”

“Joe Biden and Kamala Harris’s support for abortion on-demand, paid for by taxpayers is extreme, immoral, and will prove to be a loser at the ballot box,” Dannenfelser asserted.